The Ghana Police Service has announced a reward of GH¢10, 000.00 for anyone who can give credible information that would lead to the arrest of the killers who killed female cop, Agartha Nabin in Tamale last Tuesday.

We did report that, robbers clad in military uniform, on Tuesday evening, at the Kumbugu police checkpoint near Star Oil Filling Station in Tamale, shot dead a female cop after a gun battle with the police and stole their weapons .

Read; robbers attack police at checkpoint, kill one and steal their weapons in Nothern region

Following the sad incident, a police reinforcement team is has been have been sent to Tamale

A statement signed by Assistant Commissioner of Police, David Eklu, said, “The police headquarters has dispatched a combined team of officers from the Criminal Investigations, Intelligence and National Operations Department to Tamale to support local police investigate the murder of a policewoman”.

They are also calling on the general public to help find the killers of Agartha Nabin and is offering GH¢10, 000.00 to anyone with information.

Below is the Police statement: 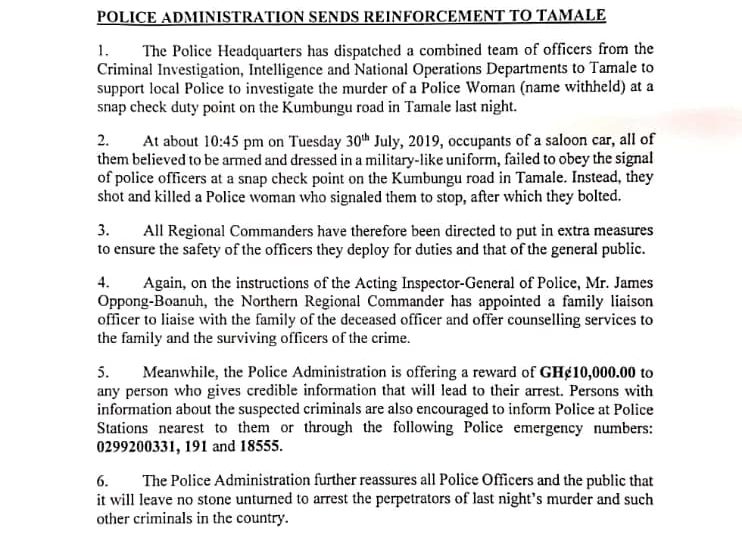 PDS Responds To Suspension of Contract By Gov’t

It’s prudent to control the usage of social media says The Good, The Bad, and The Ugly on DNT

It’s prudent to control the usage of social media says The Good, The Bad, and The Ugly on DNT