The Ministry of Gender and Social Protection has tasked about 700 Youth Employment Agency (YEA) officers to carry out a comprehensive assessment, including verification and validation of the Ghana School Feeding Programme.

The nationwide evaluation exercise that begins on Monday, August 26, would be done through the use of credible computer software application powered by Millennium Promise Alliance, an international NGO working with the Ministry of Gender and YEA.

The exercise is in response to the Auditor-General’s Report in 2018, which revealed several financial irregularities and multiple registrations as well as ghost schools, leading to huge financial losses to the state in the management of the Programme.

The Report blamed 81 metropolitan, municipal and district assemblies (MMDAs) and the management of the programme for the mismanagement.

The report also singles out the Sekyere East District for particularly padding the enrolment of the figures and manipulation of data.

Following the revelation, the sector Minister, Cynthia Morrison, set out to take steps to clean up the system.

Miss Morrison subsequently wrote a letter to the YEA CEO, Justin Kodua, on August 14, to intervene. Copied in the letter was acting National Coordinator of GSFP, Gifty Quashigah.

“I will be most grateful if you could kindly use your good office to carry out a nationwide comprehensive assessment (verification, validation, etc.) of the Ghana School Feeding Programme, to enable the ministry clean and update its records for credible payments,” the letter stated.

According to her, “this request has become necessary due to the numerous challenges facing the programme.” 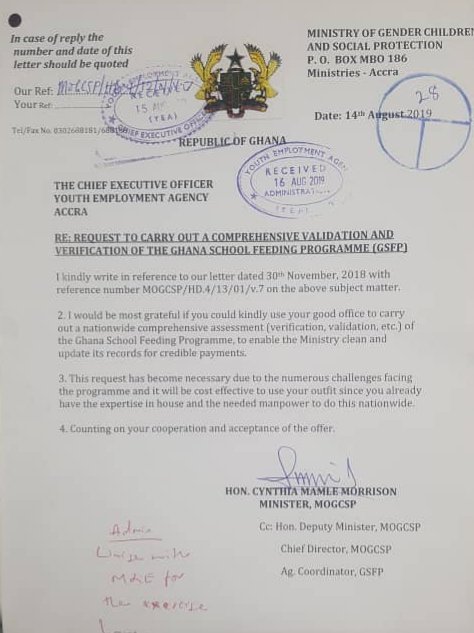 Over 200,000 people given Merck Ebola Vaccine in Congo

Trump says US and China to resume trade talks

Trump says US and China to resume trade talks