DNT Declares Diaspora Returnee as Person of the Year 2019

There has never been a year like this in Ghana

In 2001 the First ever Ghana Diaspora Homecoming Summit was organized under the leadership of Stephen Asamoa Boateng. That event brought in droves of Ghanaians who had left the shores of their dear country in search for greener pastures for nearly two decades. That return marked the first of a series of periodic surge of returnees to Ghana to contribute to nation building

The next major Homecoming summit was held in July of 2017 under the leadership of Alex Dadey. that event also witnessed a surge of Ghanaians who were much more resolved, much more entrenched in their respective overseas domicile, and perhaps much more professionally experienced. Not surprisingly, the new administration tapped into their professional acumen in record fashion hiring hundreds, and several thousands more employig their talents within the private sector at various levels.

When in September of 2018 President Nana Addo Dankwa Akufo-Addo announced in Washington, DC that Ghana was going to open her doors to any African in the diaspora willing to come home to Ghana either to visit or beyond to mark 400 years of the enslaved Africans being forcibly taken to the western hemisphere, no one could have imagined the level of response. The Year of Return coincided perfectly with a Trump administration that went as far as rhetorically telling a sitting member of the United States Congress to “go back home.”

The result? A seeming collective reactionary statement from the African community around the world emphatically reminding like minded go-back-home agenda pushers that indeed we have somewhere to go. The travel websites came to live; the connecting phone calls started being made; the hotels began to receive record setting advanced booking; and the flights begun to fill up. Destination Ghana became the resounding theme among people of African descent all over the world. 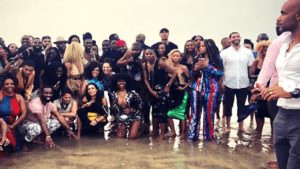 More importantly, short of a few inevitable mishaps and service shortfalls that such a a high level of influx are wont to generate, the visitors were not disappointed. Celebrities and non-celebrities alike took to social media to demonstrate the ecstatic level experiences in Ghana. And when they returned home to their respective domiciles, they told their friends about Ghana and those friends also embarked upon the visit to see for themselves.

But almost missing in the euphoria was the non-national African who had been here years prior, and who had enjoyed Ghana like Gail Nikoi and Sherrie Thompson. They did not need a Year of Return type invitation to come to Ghana, but they came and made Ghana their home for decades before the bright lights came on. What were they to make of their best-kept-secret that had now been blown wide open?

Well, the president had plans for them too. As the year begun to wind down one hundred and twenty-six of them were invited to the Jubilee House and conferred with the honor of Ghanaian citizenship in a ceremony that re-vibrated around the world.

Thus as the year 2019 closes out into 2020, we at Diaspora Network Television cannot think of any person more deserving of the title of Person Of The Year other than the member of the African family from around the world who answered the call to come to Ghana whether for the Year of Return, or previously to visit and/or settle in Ghana.

Congratulations to our brothers and sister.

Ghana to produce electricity from cocoa