As the world remains fixated on COVID-19 and how it is ravaging through the world with no seeming remedy, painfully obscured is one age-old dilemma that afflicts and kills far more people than the overly feared pandemic – hunger.

Hunger is one of the biggest problems in our world today. Hunger is defined by Webster as the physical debility caused by the lack of food (“Hunger” 242). Hunger, however, is not just a physical condition. Unfortunately, hunger is a way of life. Hunger causes people to suffer not only physically but emotionally as well.

Everyday people faced with starvation may ask themselves, “Can I condone stealing food from someone else to survive? What if, by stealing from them, I make them hungry? What about my family?”. No one should have to be faced with choices like that. That is why hunger is one of the chief problems on this earth, and must be stopped.

Hunger is a pressing concern no matter where you look. However, not only does South America have some of the most impoverished people in this hemisphere, it also could contain the answers needed to help them. 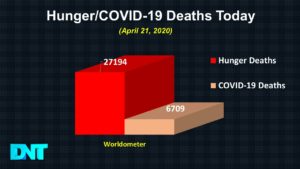 By the end of today hunger would have killed almost 30,000 worldwide, and it would have done so quietly out of the glare of any cameras or media attention. Compare that to about 7,000 who would succumb to the much-touted coronavirus.

The fact of the matter is that hunger has not attracted the necessary attention because it kills mostly poor people whereas the coronavirus is indiscriminate when it comes to its victims.

As the world focusses on a virus that will come and pass, it is hoped that hunger will take center stage and attract the due attention and resulting resources. Let’s remember that in the Democratic Republic of Congo and in Nigeria, needy people have boldly declared that they would rather violate any restrictions on their movement and go out to find food rather than stay at home and die of hunger.

That drives home the point about which of the two deaths is more painful.

Valentino Rossi: Maverick Vinales can fight for title with Yamaha

Valentino Rossi: Maverick Vinales can fight for title with Yamaha