(From DNT Ukraine) A 24-year-old Congolese student was a victim of a fatal stabbing attack in the city of Ternopil in Ukraine on Saturday May 9 after an argument with the lesbian partner of his girlfriend, police said. The victim had posted a video on social media of the two women engaged in a lesbian kiss, an illegal act that can also attract the wrath of the Ukrainian Nationalists who are known to kill homosexuals.

On May 9, at about 4 a.m., officers from the Ternopil Police Department received a message from the ambulance crew that they had found the body of a dead man with a stab wound at his residence. Upon leaving the scene, police established the identity of the deceased. He turned out to be a 24-year-old national of the Democratic Republic of the Congo, who studied at a university in Ternopil.

According to Volodymyr Halevych, deputy head of the Ternopil Oblast GUNP, law enforcement officers carried out priority investigative actions interviewing possible eyewitnesses and removing video from surveillance cameras. The investigations established the identity of the suspect who turned out to be a 17-year-old a resident of one of the villages of Ternopil district.

The suspect, known only as Alissa, became enraged by the social media posting but calmly called her partner’s boyfriend Heritier Fondly on the phone and asked to come over for a discussion. Surveillance videos are said to establish that the unsuspecting Heritier went downstairs to escort the suspect up to his apartment where she confronted him and allegedly stabbed him before fleeing in a taxi. 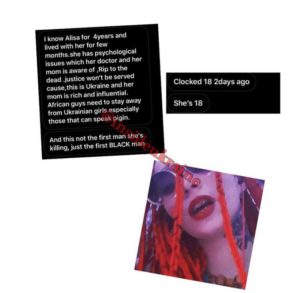 The report further stated that the severely wounded Heritier staggered to seek help from a neighbor but returned to his apartment, after receiving no response, where he later died.

The accused girl who is classified as a minor, but who is said to have just turned 18 two days ago, has since posted a video warning anyone who says anything about the incident. In the said video, she vows to “kill” any “expletive” who says anything and “feed” their “smelling flesh” to her dogs.

With a highly influential mother, many are now saying that she may get away with this murder, as she has allegedly done in the past. And even if she does not face the law for the murder and the homosexual activity, which is illegal in Ukraine, Alissa is likely to face the Ukrainian Nationalists who have been rumored as going after homosexuals and even killing some.

The Congolese community in Ukraine is seeking justice in the murder of their member saying enough is enough. According to them, similar murders of other Africans, including one who was burned, have gone unresolved. They further stated that the suspect has a history of psychopathic behavior and has been shielded from answering to her past crimes by her influential mother.

Celebrity Foodies: See What the Stars Are Snacking on Today