A mini rally that was held by the Diaspora Coalition at the Ghanaian capital in adherence to restrictions on social gathering attracted more than the invited participants as a crowd gathered in front of the Diaspora Affair Forum in solidarity with protesting youth across the United States.

The W E B Dubois center was the scene of the first solidarity rally which was referred to by Ambassador Erieka Bennet as a funeral for all the people of African descent who have met their untimely death at the hands of American police. The crowd wore mostly black with red band on their wrist to symbolize the untimely death of all victims of police brutality.

In his speech at the event, the leader of the Diaspora Coalition Rabbi Kohan said when he left the United States in 1994 to relocate to Ghana, he was leaving behind a culture of police brutality on blacks but wondered why the most powerful nation on earth is still grappling with institutional racism 26 years later.

“We want to call out all the names of those who have fallen victim to remind them that we will never forget,” he said. Akwasi Agyemang, CEO of the Ghana Tourism Authority added that when we as a nation called our brothers and sisters home last year in the Year of Return, we were signaling that they have a home to return to, and that what injustices afflict them there we feel over here in Ghana.

The Founder and CEO of Diaspora Network Television (DNT) Jermaine Nkrumah on his part pointed out that we as a people would not receive the respect that we seek from others until we begin to respect ourselves. He proceeded to invoke a mantra that he called “Respect Your Race” as the first step to earning the respect of others that would eventually force them to value our lives. 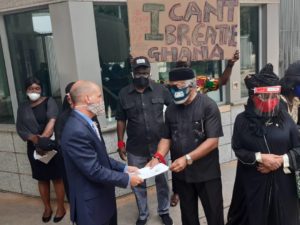 After the round of speeches, a selected group of roughly seven people proceeded to deliver a petition that had been signed both online and at the rally to the United States Embassy just two blocks away.