New charges have been announced against all of the sacked police officers present at the death of African American George Floyd in Minneapolis.

The charge against Derek Chauvin has been elevated to second-degree murder, court documents show.

The other three officers, previously uncharged, face counts of aiding and abetting murder.

Floyd’s death has sparked huge protests across the US against racism and the police killings of black Americans.

The vast majority of demonstrations over the past eight days have been peaceful, but some have turned violent and curfews have been imposed in a number of cities.

Announcing the new charges, Minnesota’s Attorney General Keith Ellison said that they were in the interests of justice.

Derek Chauvin had initially faced charges of third-degree murder and second-degree manslaughter. These will stay on his charge sheet.

Minnesota Senator Amy Klobuchar said on Twitter that the latest charges were “another important step for justice”. 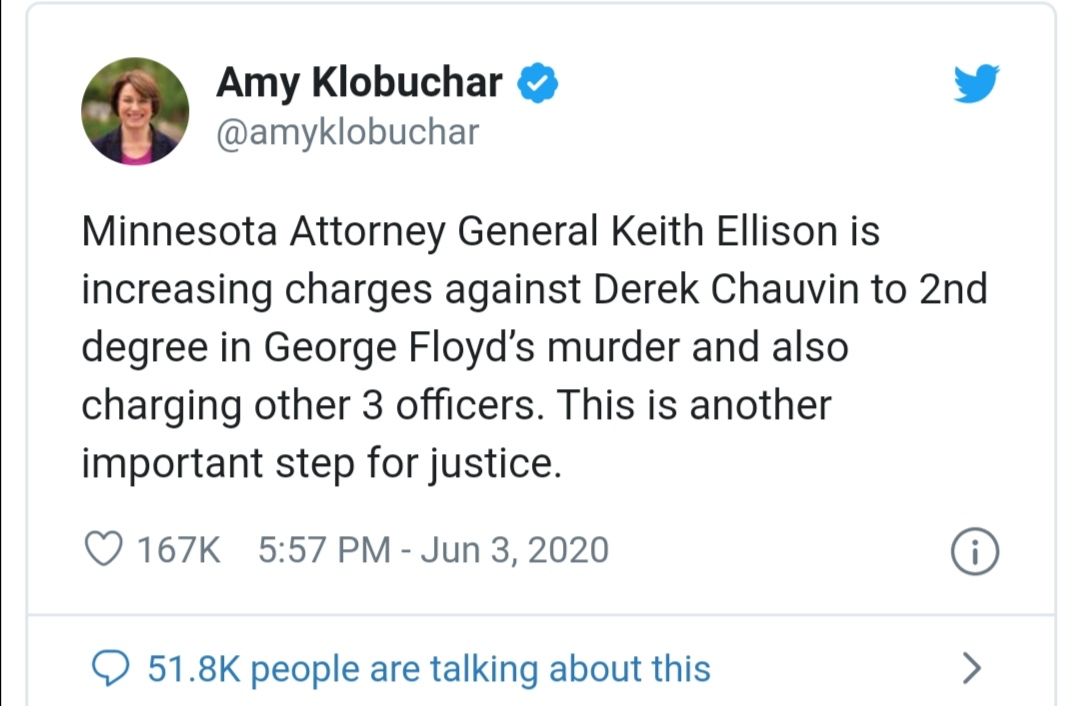 Floyd family lawyer Benjamin Crump said in a statement: “This is a significant step forward on the road to justice and we are gratified that this important action was brought before George Floyd’s body was laid to rest.”

But he later told CNN that the family believed the charge against Derek Chauvin should be first-degree murder and that they had been told that the investigation was ongoing and the charges could change further.

At a press briefing, rights activist Rev Al Sharpton said that the Floyd case must lead to a national federal act.

He said: “If we come out of all this and do not have federal legislation where we can protect citizens from local policing… then all of this is drama to no end. Drama in the street must be geared to fundamental legal change.”

What did the Attorney General say?

Mr Ellison said he was under no illusion that bringing a successful prosecution against the former police officers would be difficult.

“Winning a conviction will be hard. History does show there are clear challenges,” he said.

Only one officer in Minnesota has been convicted of killing a civilian while serving in the role.
Mr Ellison said George Floyd was “loved by his family, his life had value” and that “we will seek justice for you and we will find it”.

He said bringing justice to society more generally would be slow and difficult work and that Americans did not have to wait for the end of the Floyd case to start that work.
“We need to rewrite the rules for a just society now,” he said.

What do the charges mean?

First- and second-degree murder under Minnesota law require proof that the defendant intended to kill. First-degree in most cases requires premeditation, with second-degree more related to crimes of passion.

A third-degree murder conviction would not require proof that the defendant wanted the victim to die, only that their actions were dangerous and were carried out without regard to human life.

A second-degree murder conviction can carry a sentence of up to 40 years, 15 longer than for third-degree.

Depression made me score own goals at Fulham – John Paintsil