Social media has been abuzz with accusations of unfair military deployment at Ghana’s three borders with Voltarians crying foul that the ruling NPP administration is unfairly targeting their regions for heavy military presence. Some even went as far as to claim that the military deployment was only in the Volta and Oti Regions.

In response the military issued a list of all the border areas and the number of troops deployed. After a careful analysis of the information received from the Ministry of Defense, Diaspora Network Television can conclude that while there does not appear to be an unfair targeting of Volta and Oti Regions, the border with Cote d’Ivoire is relatively less manned than the other two borders with Togo and Burkina Faso. 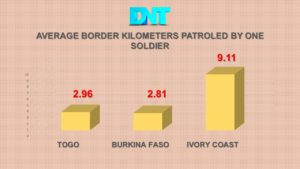 Ghana’s border with Togo covers 1,098 kilometers and span five regions – Volta, Oti, Northern, North East, and Upper East. A careful count of all the deployments covering these five regions come to 371 troops. This means, each soldier patrols an average of 2.96 kilometer.

To the north and northwest, Ghana’s border with Burkina Faso covers 602 kilometers and the number of troops deployed in border towns in Upper East and Upper West is 214. This means on average, one deployed soldier patrols 2.81 kilometers

The western border with Cote d’Ivoire spans three regions – Bono, Western North, and Western, and it is 720 kilometers in distance. And unless the Ministry of Defense omitted the deployment numbers for Western North Region, that entire western border is manned by just 79 soldiers for an average patrol area of 9.11 kilometers.

It is uncertain if the Ministry of Defense factored in data for border crossing traffic to make the determination as to how many troops to be deployed. Absent of this critical piece of information being a factor in the determination, the findings by the DNT study is that the western border is relatively sparsely monitored during this exercise.