Tears flow as thousands bid farewell to Maradona in Argentina

Tens of thousands of fans, many weeping but eager to honor Diego Maradona, filed past the coffin of Argentina’s most iconic soccer star on Thursday, some confronting police who tried to maintain order at the country’s presidential mansion.

Fans blew kisses as they passed Maradona’s wooden casket in the main lobby of the presidential Casa Rosada, some strike their chests with closed fists and shouting, “Let’s go Diego.” 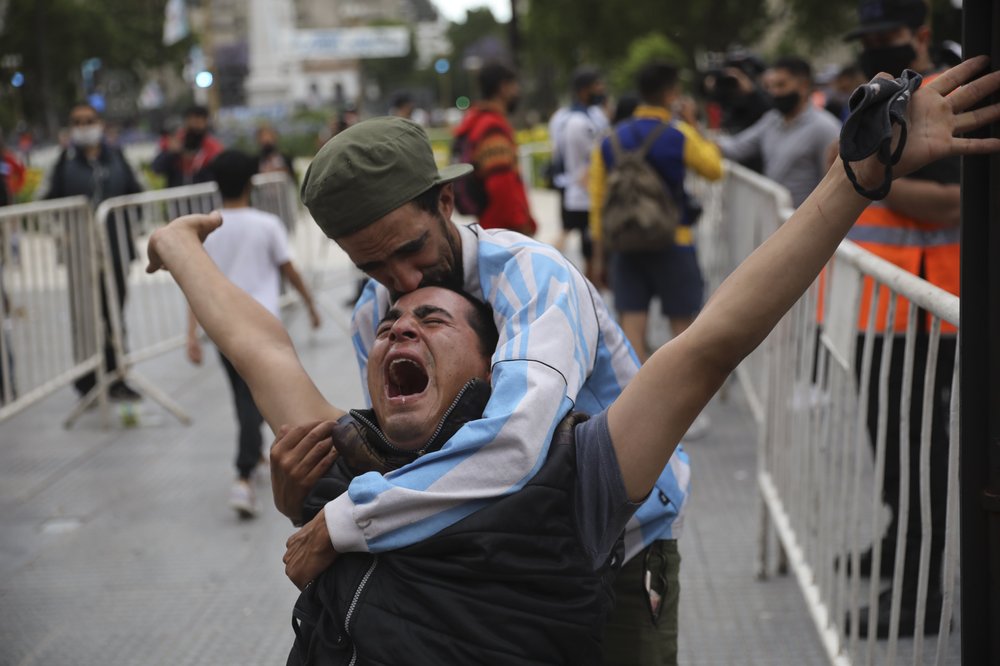 The casket was covered in an Argentine flag and the No. 10 shirt he famously wore the national team. Dozens of other shirts of different soccer teams tossed in by weeping visitors were scattered on and around the casket.

Maradona died on Wednesday of a heart attack in a house outside Buenos Aires where he had been recovering from a a brain operation on Nov. 3.

Open visitation, started at 6:15 a.m. after a few hours of privacy for family and close friends. The first to bid farewell were his daughters and close family members. His ex-wife Claudia Villafañe came with Maradona’s daughters Dalma and Gianinna. Later came Verónica Ojeda, also his ex-wife, with their son Dieguito Fernando.

Jana, who Maradona recognized as his daughter only a few years ago, also attended the funeral. 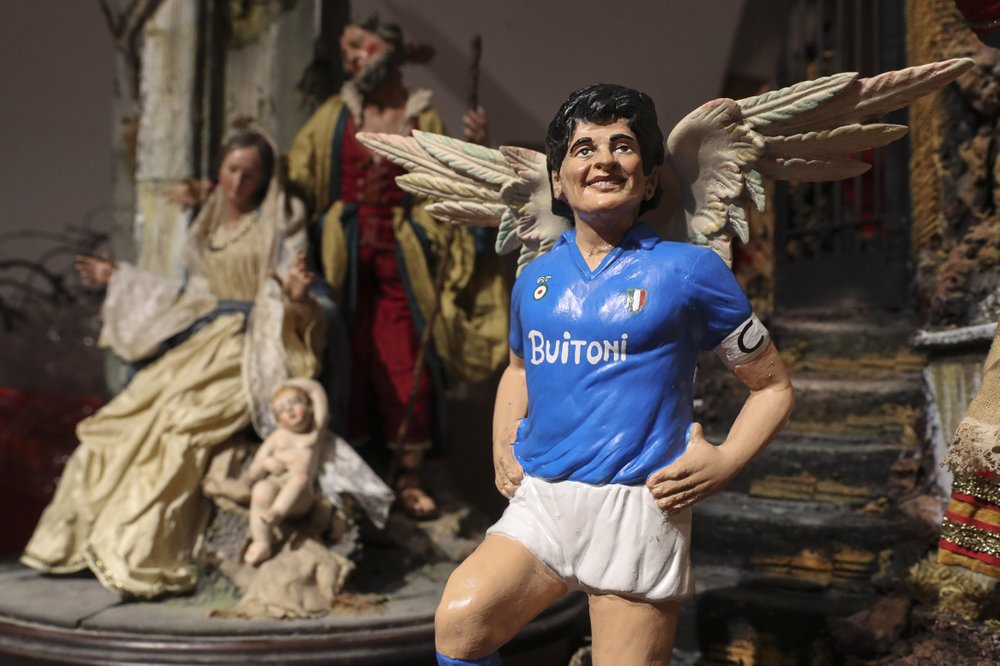 Then came former teammates of the 1986 World Cup-winning squad including Oscar Ruggeri. Other Argentine footballers, such as Boca Juniors’ Carlos Tévez, showed up, too.

Some fans grew impatient as police tried to maintain order, throwing bottles and pieces of metal fencing at police outside the presidential offices in the heart of Buenos Aires. Officers at one point used tear gas to try to control them.

Shortly before noon Argentina President Alberto Fernández arrived and placed on the casket a shirt of Argentinos Juniors, Maradona’s first club as a professional.

In tears, Fernández also laid two handkerchiefs of the human rights organization Madres de Plaza de Mayo, who wore them for years to protest the disappearance of their children under the Argentina’s military dictatorship between 1976 and 1983.

Maradona, an outspoken leftist who had an image of Argentine Revolutionary Che Guevara tattooed on one bicep, was a friend of the Madres and of other human rights organizations.

The lines started forming outside the Casa Rosada only hours after Maradona’s death was confirmed and grew to several blocks. Among those present were the renowned barrabravas fans of Boca Juniors, one of his former clubs. 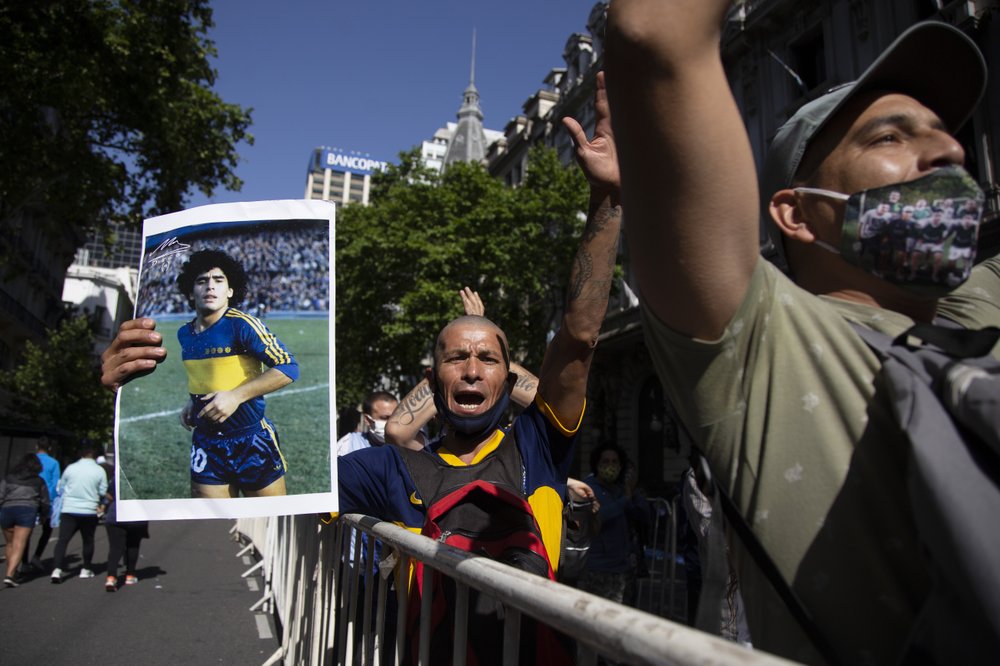 The first fan to visit was Nahuel de Lima, 30, using crutches to move because of a disability.

“He made Argentina be recognized all over the world, who speaks of Maradona also speaks of Argentina,” de Lima told The Associated Press. “Diego is the people…. Today the shirts, the political flags don’t matter. We came to say goodbye to a great that gave us a lot of joy.”

He led an underdog team to glory in the 1986 World Cup, winning the title after scoring two astonishing goals in a semifinal match against England, thrilling a country that felt humiliated by its loss against the British in the recent Falklands war and that was still recovering from the brutal military dictatorship. 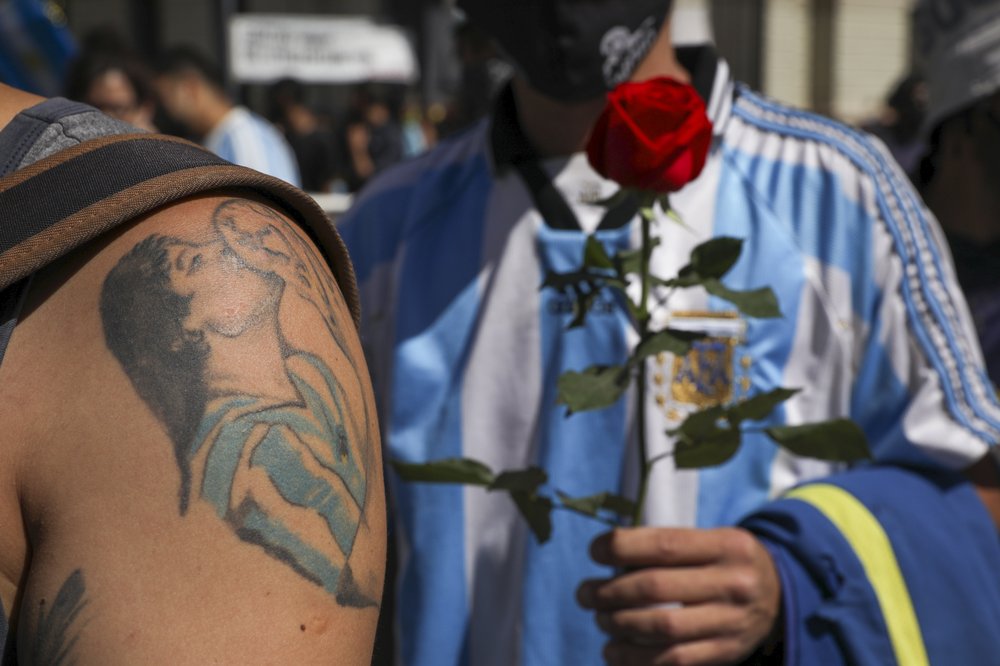 Many deeply sympathized with the struggles of a man who rose from poverty to fame and wealth and fell into abuse of drug, drink and food. He remained idolized in the soccer-mad nation as the “Pibe de Oro” or “Golden Boy.”

Lidia and Estela Villalba cried near the exit of the lobby. Both had a Boca Juniors shirt and an Argentinian flag on their shoulders.

“We told him we love him, that he was the greatest,” they said at the same time.

Those waiting for enter the Casa Rosada were mostly wearing masks because of the COVID-19 pandemic, but they struggled to keep social distancing. 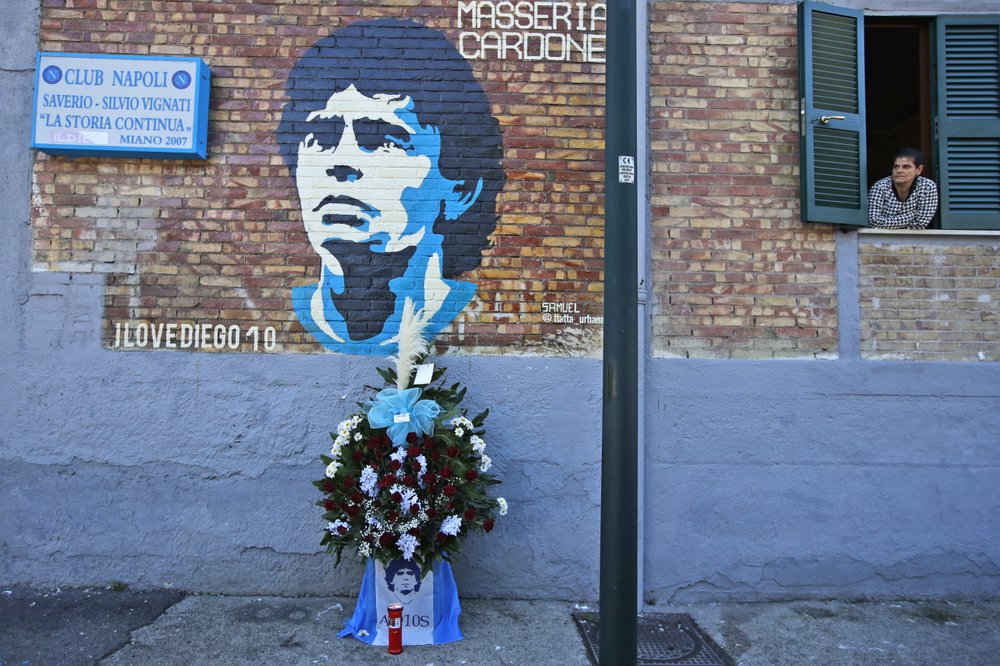 Social worker Rosa Noemí Monje, 63, said she and others overseeing health protocols understood the emotion of the moment.

“It is impossible to ask them to distance. We behave respectfully and offer them sanitizer and face masks,” she said. Monje also paid her last tribute to Maradona.

“I told him: to victory always, Diego,” Monje said as she wept.

A huge mural of Maradona’a face was painted on the tiles that cover the Plaza de Mayo, near the Casa Rosada, which was decorated with a giant black ribbon at the entrance.