A DNT EXCLUSIVE – The Madina area of Ghana’s capital of Accra and Tokyo, Japan would ordinarily have very little in common. But one young lady now serves as perhaps the only link between the two polar opposites of human abode.

Aisha Harumi Tochigi with Ghanaian father and Japanese mother was crowned Miss Universe Japan 2020 this past November in Tokyo edging out 29 other contestants including the First Runner-up Raimu Christina Kaminashi who is half Nigerian and half Japanese.

In an exclusive interview with DNT, Aisha touted the seven years she spent growing up in Madina, Accra as instrumental in shaping her for the future. Born in Japan, her early years in Madina was revealing to her in that her friends were nice to her despite her inability to speak English and had to communicate with her hands.

“I grew up in Accra Madina,” Aisha proudly answered to the question about where she grew up. “It was really fun living in Ghana. Because my friends were really nice to me, I was able to make many of them and they taught me English.”

Aisha was introduced to Bayside Acting and Modelling Agency located in Saitama, Japan and run by a Ghanaian Samual Aning known in the industry as Nana Yaw Pop two years ago by her father Kareem who needed Aisha groomed for the run at the beauty pageant.

But although the agency produced Aisha and Raimu, who ended up as winner and first runner up respectively, Nana Yaw Pop insists that the girls accomplished their feat “all by themselves.” 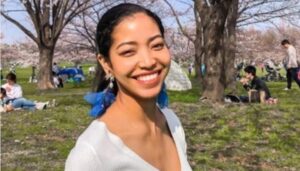 The interesting thing about Japan is that as the rest of the world appears to be recoiling from the mixing of the races, Japan appears to be heading in the opposite direction by actively encouraging race mixing.

“Japan is changing to the global standard in fashion, in entertainment. They are trying to open up to the world. Thirty years ago, there weren’t many mixed children. But today they are consciously seeking models of mixed race for their catalogues and fashion magazines,” said Nana Yaw Pop who also runs JafriQ Radio in Japan.

Aisha added that for her and the people around her, everyone treats everyone normally. “Japan is trying to be more diverse, and become more international,” she said.

In fact four out of the final five contestants were “hafu” or mixed race. Second runner-up Yuki Sonoda is Filipino-Japanese while fourth runner-up Marina Little is Kiwi-Japanese.

Aisha won the Miss Universe Japan on her second try having fallen short in the Top 5 the first time. but she knew in her heart that Africa had won when it came down to her and Raimu as the final two .

Asked if her crying was fake as is rumored to be the case with pageant winners, Aisha waived it off. “I wish my crying was fake. I was crying so much that it began to affect my makeup.”

Unfortunately due to COVID-19, Aisha felt alone immediately after she was declared winner. The pageant rules discouraged the traditional hugging by fellow contestants so she had to immediately proceed to take her winning walk after her crown was mounted on her head.