Donald Trump called everything he did, from his election to his trade deals, “historic.” But his last months in office finally make that claim correct.

by Grace Adorboe
in United States
0 0
0

One hundred and sixty years after the first Republican president was forced to put down a violent insurrection against the United States, the party’s 19th is leaving office after inciting one.

Democrat Joe Biden will take the oath of office at noon that day, becoming president and commander-in-chief of the United States, and leaving Trump suddenly vulnerable to both civil and criminal legal liabilities from which holding that office had shielded him for four years.

Trump is facing lawsuits from women accusing him of sexual misconduct, including rape; criminal investigations by both state and federal prosecutors in New York; a Senate impeachment trial that could bar him from holding federal office again; and potentially both civil and criminal exposure for his weekslong efforts to spark chaos at the U.S. Capitol in order to prevent Biden from being certified as the winner of the 2020 election. The Jan. 6 riot, which Trump egged on with a rally near the White House, quickly turned bloody and ended with the deaths of a Capitol Police officer and four Trump supporters. A second officer died by suicide days later.

“While Trump will not be receiving the Nobel Peace Prize, he will now be inducted into the Guinness Book of World Records for being the only president anywhere to have been impeached for the second time,” said Michael Cohen, Trump’s onetime lawyer who served federal prison time for, in part, his work to pay hush money to women who’d had affairs with Trump. “Congratulations, Donald, and best of luck in your future endeavors.”

Trump’s first impeachment had come a year earlier, for trying to extort the new Ukrainian leader into publicly smearing Biden, whom Trump feared even in early 2019 as the Democratic challenger most likely to oust him.

“The Trump legacy will include: the most corrupt administration in American history, the grandest handover of policymaking to corporations of all time, the most overt and vicious racism and anti-immigrant xenophobia of any administration in modern times, unparalleled incompetence, cruelty and callousness in its mismanagement of the pandemic, and rushing the globe toward climate catastrophe at the exact moment when the world needed the United States to pivot away from fossil fuel reliance,” said Robert Weissman, president of the liberal group Public Citizen. “There’s a long list of ‘accomplishments,’ far beyond these lowlights.”

A Legacy Of Lies

While Trump frequently claims he has done more than any previous president ― “In less than two years, my administration has accomplished more than almost any administration in the history of our country,” he told the United Nations just 20 months into his term ― in reality, he leaves office with among the thinnest portfolios of policy successes of any president in modern times.

While establishment Republicans managed to achieve their decadeslong goals of large tax cuts for corporations, the rollback of environmental and worker safety regulations, and the appointment of more than 200 pro-business judges to the federal bench, Trump himself checked almost nothing off the agenda he pushed at the start of his 2016 presidential campaign.

Trump promised he would renegotiate the North American Free Trade Agreement to benefit U.S. workers. Instead, it was renamed the United States-Mexico-Canada Agreement but remains functionally nearly identical, with the exception of some small tweaks lifted directly from the Trans-Pacific Partnership ― another trade pact Trump pulled out of and called the worst deal ever.

There were similar results with an infrastructure plan to rebuild the nation’s highways, bridges and airports and a health care plan to replace the Affordable Care Act: Trump repeatedly promised to push through these “tremendous” proposals but never even released a single word of either.

Trump’s creation of a “Space Force,” which he appears to believe was a major accomplishment, was merely a bureaucratic renaming of the Air Force’s Space Command, which had existed since the Reagan presidency, with no change in mission or staffing. Democrats, however, were able to trade that Trump “win” for paid family leave for federal workers, a longtime priority of theirs.

In foreign policy, Trump claimed he would “get tough” with China to help U.S. manufacturers. Instead, he launched a fruitless trade war that devastated American farmers and manufacturers both, while hurting consumers through higher prices ― all while he turned a blind eye to China’s escalating human rights abuses against its Muslim minority and increasingly totalitarian measures against all its citizens.

He claimed he would remove the threat of a nuclear-armed North Korea, but in the end did nothing ― apart from trading “love letters” with its dictator, Kim Jong Un. In Western Europe, Trump accused traditional allies of “ripping off” the United States through the NATO military alliance and European Union trade policies. The attacks strained those relationships, inuring to the benefit of Russian dictator Vladimir Putin, who has long sought to drive a wedge between the trans-Atlantic allies and who helped Trump win the election in 2016.

Even Trump’s signature promise, that he would build a massive concrete wall along the 2,000-mile southern border of the U.S. and force Mexico to pay for it, was a failure. After four years, he managed to build only 80 miles of steel fencing in areas where there had been no barrier at all, using money he raided from the Pentagon’s construction budget meant for, among other things, schools and housing for military families. Mexico has not paid anything.

Yet on that and any number of other issues, Trump would claim huge success, typically making assertions that were completely the opposite of the actual facts ― with those lies then amplified by Trump’s aides and allies.

That, said longtime Florida Republican consultant Mac Stipanovich, was perhaps the most useful piece of Trump’s legacy: “Ruining the reputations of people who might otherwise have continued in public life with the extent of their moral bankruptcy still unknown,” Stipanovich said, offering as examples: “Bill Barr, Mike Pompeo, Lindsey Graham.”

No Intention Of Fading Away

Despite failing to deliver on his promises, despite a botched coronavirus response that began with months of denial, despite tens of thousands of lies to the public on any number of topics, and despite funneling many millions of dollars from domestic and foreign lobbyists, Republican donors large and small, and American taxpayers into his own pockets over his four years in office, Trump nevertheless received nearly 11 million more votes in 2020 than he had in 2016.

“There are 74 million Americans who know exactly who Donald Trump was and voted for him anyway,” said one former White House official who spoke on condition of anonymity.

Within days of losing the Nov. 3 election, Trump began capitalizing on that popularity to raise millions of dollars, first with the trumpeted aim of challenging the voters’ decision and then under the guise of supporting GOP candidates in two Senate runoff elections. But, in fact, he can use the proceeds of the “leadership PAC” he created for almost anything he wants, including paying himself an eight-figure salary. He wound up spending nothing at all on the Georgia Senate races. Trump has also vowed to remain involved in Republican politics by attacking incumbents who have not shown him sufficient loyalty and has hinted at another White House run himself in four years. 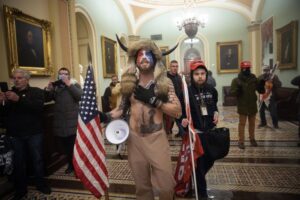 Those threats have kept Republicans largely muted in their criticisms since the election. A recent Axios-Ipsos poll showed that, even after his incitement of the mob attack on the Capitol, 64% of Republicans said they supported his recent behavior, and 57% said they would like to see him as their 2024 nominee. Indeed, in the House impeachment proceedings against him a week after the attack on the Capitol, only 10 of the 211 Republican lawmakers voted with the Democrats in favor of the resolution.

At a Republican National Committee gathering in Amelia Island, Florida, Trump called into a breakfast meeting the morning after the violence he had incited. “A lot of members sat quietly, while others cheered him,” said one member on condition of anonymity. “There were a lot of RNC members who were hesitant to say anything.”

Yet that desperation to hang onto power, even if it meant shredding the Constitution and endangering the lives of his own vice president and hundreds of lawmakers, may finally bring an end to Trump’s political career. While Trump remains popular among Republicans, that support is less than it used to be, while his support among independent voters has plummeted.

If enough Republican senators vote with Democrats to reach the two-thirds supermajority needed for conviction in his second impeachment trial, a subsequent simple majority vote in the Senate could then prevent him from holding any federal office for the rest of his life.

In Pictures: New protests in France against security bill