by Grace Adorboe
in Brazil, International
0 0
0

The sweeping grasslands, dry forests, scrub and rugged mountains of Brazil’s Cerrado encompass some of the country’s most beautiful national parks. The region’s rich habitat features 11,000 species of plants and more than 200 varieties of mammals, including jaguars, anteaters, armadillos and tapirs.

“It is the most diverse savanna in the world,” said Mercedes Bustamante, an ecology professor at the University of Brasília and a Cerrado specialist.

The Cerrado, which covers more than 20% of the country, is also an important motor in Brazil’s economy, producing over half of Brazil’s beef, 49% of its soybeans, 47% of its sugar cane and almost all its cotton, according to the government agricultural research institute Embrapa.

To raise those crops, the region’s native forests and vegetation are being systematically replaced by farms and ranches. Under Brazilian law, the Cerrado enjoys much less protection than the iconic Amazon rainforest to its north. Half of its land has already been cleared, including some 2,800 square miles last year alone. (That compares to about 20% of the Brazilian Amazon gone.)

Under pressure from the ceaseless agricultural demand and the ravages of climate change, the vital biome is being destroyed at a frightening rate ― and even as its agriculture helps drive the economy, that’s bad news for Brazil.

The Cerrado plays a vital role in Brazil’s water supply, feeding eight of the country’s 12 hydrographic regions and with that much of the country’s electricity supply, around two-thirds of which comes from hydroelectric dams — which makes the signs of climate change that some parts of the Cerrado are experiencing all the more concerning.

While there are no major definitive studies into the Cerrado-wide impacts of land clearing for agriculture, there is plenty of region-specific research that points to trouble. In one so-called transition area, in Mato Grosso state — where the southern Amazon meets the western Cerrado — a study by Costa and others found that deforestation is delaying the onset of the rainy season. Fewer trees and less native vegetation reduces evapotranspiration, the process by which water transfers from plants and soil to the atmosphere, which is a vital part of the water cycle.

Researchers including Costa have also studied the longer dry season in western Bahia state, finding that rainfall has decreased 12% since the 1980s and river discharges have also declined. Land clearing has degraded weather in the northeast Cerrado region where it meets the Amazon, according to another study by researchers from Dartmouth College ― whose modeling found more warm nights, more hot days and less evapotranspiration.

The Cerrado is sometimes called an “upside-down” forest because of the deep, extensive roots its native plants use to dig down for nutrients and moisture. The roots and soil store high levels of carbon, making the region an important carbon sink. But as industrial agriculture continues to swallow up huge tracts of the Cerrado, it could become “a source of carbon,” said Bustamante, meaning it would emit more of the climate-warming gas than it stores.

Yet despite the grave risks, the region remains hugely under-protected. While nearly half of the Amazon rainforest is legally shielded against deforestation, just 7.7% of the Cerrado is. Amazon farmers are allowed to clear 20% of their land; Cerrado farmers can clear trees and native vegetation on up to 80% of their land.

Even with these lax restrictions on land clearing, there is still plenty of illegal deforestation in the Cerrado. A 2020 report published by the monitoring network Trase, along with Brazilian nonprofits Imaflora and ICV, found that 95% of the land clearing on soybean farms in just the Cerrado area of Mato Grosso was illegal.

More broadly, a fifth of the soybeans exported to the European Union from Brazil’s Cerrado and Amazon regions combined and around 17% of the beef “may be contaminated by illegal deforestation,” according to a 2020 study by Brazilian and international scientists. 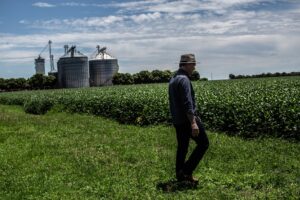 Many soybean farmers think they should be allowed to clear as many trees and as much native vegetation as they like, within Brazilian law. Why should Brazil preserve its forests, asked Cerrado farmer Alan Juliani, when Europe and the United States long since destroyed much of theirs?

Juliani’s family story mirrors Cerrado’s development. His grandfather Alcides bought a farm in Bahia in northeastern Brazil in 1980, hoping that growing soybeans would help provide for his eight children. He was one of many pioneer farmers who moved from southern Brazil to the cheaper land of the Cerrado.

Life on Brazil’s soybean frontier was tough. “There was nowhere to buy parts, there were no shops, there was no power, there was no telephone,” Alan Juliani told HuffPost. “It was real suffering.” But things are different now. Today Juliani, 42, is a successful soybean farmer. He is president of Bahia’s branch of the soy producers association (APROSOJA) and farms nearly 15,000 acres in western Bahia, part of a frontier region known as Matopiba.

Like many soybean farmers there, he is skeptical that climate change is affecting the Cerrado. “There was always a lack of rain,” he said. And like many Brazilian farmers, he supports far-right President Jair Bolsonaro, who has attacked and undermined environmental agencies while falsely claiming that Brazil is a model for environmental protection despite soaring Amazon deforestation. Key ministers in Bolsonaro’s government dispute climate change science.

But not everybody in the Brazilian government is ignoring the changes in such an important agricultural region. Worried researchers from Embrapa are developing tough new strains of soybeans. “Embrapa soybeans teams are looking for varieties more adapted to climate change because we are seeing more frequent droughts, more frequent excessively heavy rains,” said Alexandre Nepomuceno, the institute’s head of soybeans research.

Many of the soybeans grown by farmers like Juliani are bought by giant international companies ― including two U.S. corporations, Bunge and Cargill, which keep silos across the Cerrado. 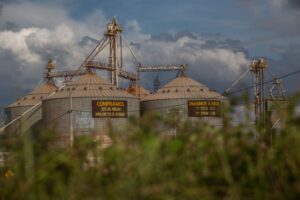 As the Cerrado is being swallowed up by agriculture, these companies are coming under pressure to guarantee that the soybeans they trade were not grown on land that was deforested, either legally or illegally. Bunge has promised to eliminate all deforestation — including legal clearing — from its supply chain by 2025, and Cargill has vowed the same by 2030.

The U.S. nonprofit Mighty Earth has attempted to calculate how much land clearance the farms supplying companies like Cargill and Bunge carried out in 2019 and 2020 — and how much of that might have been illegal ― using satellite imagery and supply chain research.

“It is possible that producers can get permits to clear in these areas, but it’s very unlikely they have done. We present these cases to all the traders. If they come forward with documentation, we will exclude that record,” Sarah Lake, Mighty Earth’s global director for Latin America, told HuffPost.

Both Cargill and Bunge said they do not source from illegally cleared land.

“We will not source soy from farmers who clear land illegally or plant in protected areas,” said a spokesperson for Cargill. “This is outlined in our Soy Policy and we hold our suppliers accountable to complying with our expectations.”

A spokesperson for Bunge said the company “does not source soy from illegally deforested areas. … Bunge monitors the occurrence of deforestation on direct supply farms, and blocks any farm that does not comply with environmental or labor legislation.” As to Mighty Earth’s report, the spokesperson added, “in all the cases linked to Bunge there was no connection with soy planted over deforested areas and sourcing to the company. Also, the report is based on past relationships, and not future ones.”