by Grace Adorboe
in Football, International
0 0
0

Details of the European Super League contracts signed by all 12 rebel clubs have been leaked online with some startling detail about the riches on offer.

German outlet Der Spiegel has released a few pages of the document, which was agreed to by the Premier League’s ‘Big Six’, as well as three clubs from Italy and three from Spain before the controversial announcement last week.

They include Barcelona and Real Madrid both receiving an extra €60million (£52m) each more than their rivals, the right for each club to exclusively broadcast a number of matches and a £130m fee for those wishing to withdraw from the competition.

There was a furious backlash from fans, players, managers, politicians and even royalty this week after plans of 12 elite European clubs to form their own competition were announced on Sunday night.

But the scheme was in tatters by Tuesday night and its founder, Juventus chairman Andrea Agnelli, announced it could not go ahead after the ‘Big Six’ Premier League clubs had all withdrawn by Wednesday morning.

On Friday morning, American investment bank JP Morgan seemed to put the final nail in the coffin after they pulled their £3.5billion backing of the Super League.

It was later announced that, after a meeting of UEFA’s executive committee, the 12 clubs involved would not face any sporting punishment for the role in the scheme.

However, leaked details of the 23-year contracts signed by the 12 clubs have given an insight into some aspects of the competition and the financial rewards that those involved were set to receive.

It now seems clear why Real Madrid and Barcelona have still not officially withdrawn from the Super League because they were due to earn significant amount more than their rivals.

One area of the contract is titled ‘Additional compensation for the first 2 seasons of the Super League competition’.

It goes on to say: ‘Barcelona and Real Madrid will be paid the additional fixed amount of €60m (£52m) each, payable in two equal instalments.

Barcelona are facing huge financial debts and need to bring in every penny possible to cover it with newly-elected president Joan Laporta saying the breakaway competition is ‘absolutely necessary’ on Thursday night.

Another part of the contract says that Super League clubs ‘will have the right to show four of their regular season games live per season “exclusively” on “core club platforms”‘, such as their website, club mobile application and TV channel. 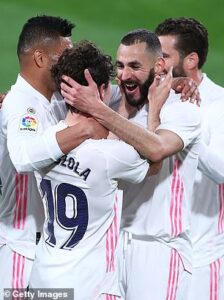 This would ensure additional income for clubs because it would allow them to earn extra revenue from subscriptions to those packages.

One page shows that of the 15 founder clubs – which is the original 12 plus Paris Saint-Germain, Bayern Munich and Borussia Dortmund, who were all due to be invited – AC Milan, Atletico Madrid, Dortmund and Inter Milan would receive a smaller share of the initial ‘infrastructure grant amount’.

Arsenal, Bayern, Chelsea, Barcelona, Juventus, Liverpool, Manchester City, Man United, PSG, Real Madrid and Tottenham were due to earn 7.7 per cent of the initial payment given to founder members.

The other four teams were only due to bring in 3.8 per cent of that figure.

However, perhaps the most important figure leaked in the contracts is the ‘break-up fee’ that could come into play now the majority of the founder clubs have pulled out.

It says that clubs who pull out of the Super League face a ‘£130million’ penalty fee, which would be a huge blow to the six Premier League clubs and others who have withdrawn their support.

The leak came after Super League clubs were handed a boost on Friday when UEFA determined they would not hand them sporting punishments.

A UEFA executive committee meeting was held and possible sanctions for the ‘Dirty Dozen’ who were willing to break away and form their own continental competition were discussed.

But UEFA chiefs decided not to kick any of those involved out of this season’s Champions League and Europa League competitions or impose a ban from next year’s tournaments.

But Barcelona and Real Madrid’s faith in the Super League working in future took yet another setback on Friday when financial backers JP Morgan pulled their £3.5bn of support.

In a statement, JP Morgan said: ‘We clearly misjudged how this deal would be viewed by the wider football community and how it might impact them in the future. We will learn from this.’

It was thought JP Morgan’s financial commitment to the Super League plan was primarily going towards a payment of between €200m (£174m) and €300m (£261m) to each participating side.

Their statement comes just a couple of days after sustainability ratings company Standard Ethics downgraded the investment bank’s credibility rating from ‘adequate’ to ‘non-compliant’ after questions were raised about their integrity following the initial announcement of their backing of the Super League.

A statement from UEFA on Friday simply read: ‘In addition, the UEFA Executive Committee was updated on the latest developments regarding the so-called “Super League” including the options available to UEFA and the steps it is considering taking.’

The European Club Association tweeted: ‘We want to move past the events of this week and encourage and inspire the global football community, as matches return this weekend. Clubs can only succeed both on & off the pitch if we work hand in hand.’

Meanwhile, Downing Street has insisted UK Prime Minister Boris Johnson had no idea of the Super League until Sunday night after The Mirror reported he had talks with Manchester United’s Ed Woodward at No 10 just days before the news broke.

It is thought Woodward was there to discuss football’s strict coronavirus rules and the return of fans to stadiums as part of the Government’s easing of lockdown but it is claimed he did meet Johnson after the meeting.

Labour have since demanded the release of the minutes of the meeting ‘in order to clear up any confusion and avoid accusations of hypocrisy.’

The anger of Premier League fans has yet to subside, with Manchester United having to bring in extra security measures after angry fans breached security at their Carrington training base before confronting boss Ole Gunnar Solskjaer on Thursday.

The supporters were protesting against the club’s American owners, the Glazer family, over their leading role in the doomed European Super League plot and challenged manager Solskjaer about why he did not speak out against it.

The group of around 20 fans who breached the premises belong to the self-styled ‘Men in Black’ who also attacked United chief Ed Woodward’s house in Cheshire in January last year.

Pictures of Solskjaer and other staff members arriving on Friday morning showed a greater security presence at the entrance with even the manager getting a full check before he was allowed to enter.

He was stopped and forced to remove his sunglasses to show the security team his face. Technical director Darren Fletcher was seen arriving shortly after and gave the guards a thumbs up as he drove in.

Everyone trying to enter the complex was asked for their ID.

Two of the original Red Knights consortium who attempted to oust the Glazer family from power at Manchester United more than a decade ago have urged the American owners to give up their controlling interest in the club.

Prominent figures in the failed £1.25billion takeover of United in 2010, the duo want the Glazers to reduce their stake from 74.9 per cent to no more than 49.9 per cent to encourage other investors to buy into the club.

They say the owners’ shares should be sold for $14 each – the share price when United were floated on the New York Stock Exchange in 2012 – as a gesture of goodwill.

They also want to end the club’s dual-class share structure so all shareholders have the same voting rights.

Liverpool fans are also still irate at their owners – Fenway Sports Group – and have called for change.

Prominent Liverpool supporters’ group Spion Kop 1906 addressed a passionate letter directly to owner John Henry and his fellow FSG representatives on Thursday, in which they outlined the ‘shame and embarrassment’ brought onto the club.

The fan group, who are responsible for the famous flag and mosaic ensembles which decorate the iconic Kop end on matchdays, have now urged that FSG sit down with them in a face-to-face meeting and discuss the appointment of a fan representative to the board, with the power to have a say on matters.

The same fan group had been among the first to apply pressure on Liverpool’s owners, after greeting the initial Super League announcement with a response of informing the club they would be removing their flags from the stadium.

Attention is now turning to how such a situation can be prevented in the future and serious reform of how English football is run appears to be very much on the agenda.

A fan-led review into the power structures of English clubs has been announced by the Government to be chaired by Tracey Crouch MP.

And one of the ownership models to be considered will be Germany’s 50+1 rule. It’s a system used by the German Football League (DFL) to ensure clubs don’t fall under the influence of external investors such as Russian oligarchs or Middle Eastern sovereign wealth funds.

Basically, 50 per cent of the club’s shares, plus one share, must belong to the club’s members – in other words, the fans of the team. This ensures the supporters retain the majority voting rights on any issues affecting the club and one single investor cannot just waltz in and take control.

Without adherence to the 50+1 rule, the DFL would not grant a club a licence to play in the Bundesliga.

EU threatens to ban cocoa from Ghana over illegal mining

EU threatens to ban cocoa from Ghana over illegal mining

What is ‘black fungus’ infection found in India’s COVID patients?

Over 4,000 Indians die of COVID as pandemic ravages rural areas

What is ‘black fungus’ infection found in India’s COVID patients?

Over 4,000 Indians die of COVID as pandemic ravages rural areas