by Grace Adorboe
in Entertainment, International
0 0
0

Chloé Zhao’s “Nomadland,” a wistful portrait of itinerant lives on open roads across the American West, won best picture Sunday at the 93rd Academy Awards, where the China-born Zhao became the first woman of color to win best director and a historically diverse group of winners took home awards.

In the biggest surprise of a socially distanced Oscar ceremony held during the pandemic, best actor went to Anthony Hopkins for his performance in the dementia drama “The Father.” The award had been widely expected to go to Chadwick Boseman for his final performance in “Ma Rainey’s Black Bottom.” The night’s last award, it ended the ceremony on a down note, particularly since Hopkins wasn’t in attendance.

Hours later, Hopkins made a belated victory speech from his Welsh homeland and paid tribute to Boseman, who he said was “taken from us far too early.”

The “Nomadland” victory, while widely expected, nevertheless capped the extraordinary rise of Zhao, a lyrical filmmaker whose winning film is just her third, and which — with a budget less than $5 million and featuring a cast populated by non-professional actors — ranks as one of the most modest-sized movies to win Hollywood’s top honor. (Zhao’s next film, Marvel’s “Eternals,” has a budget approximately 40 times that of “Nomadland.”)

A plain-spoken meditation on solitude, grief and grit, “Nomadland” stuck a chord in a pandemic-ravaged year. It made for an unlikely Oscar champ: A film about people who gravitate to the margins took center stage.

“I have always found goodness in the people I’ve met everywhere I went in the world,” said Zhao when accepting best director, which Kathryn Bigelow (“The Hurt Locker”) was the only previous woman to win. “This is for anyone who has the faith and the courage to hold on to the goodness in themselves and to hold on the goodness in other no matter how difficult it is to do that.”

With a howl, “Nomadland” star Frances McDormand implored people to seek out her film and others on the big screen. Released by the Disney-owned Searchlight Pictures, “Nomadland” premiered at a drive in and debuted in theaters, but found its largest audience on Hulu.

“Please watch our movie on the largest screen possible,” McDormand said. “And one day very, very soon, take everyone you know into a theater, shoulder to shoulder in that dark space, and watch every film that’s represented here tonight.”

The most ambitious award show held during the pandemic, the Oscars rolled out a red carpet and tried to restored some glamour to a grim year. For the first time ever, this year’s nominees were overwhelmingly seen in the home during a pandemic year that forced theaters to close and prompted radical change in Hollywood.

More women and more actors of color were nominated than ever before, and Sunday brought a litany of records and firsts across many categories, spanning everything from hairstyling to composing to acting. It was, some observers said, a sea change for an awards harshly criticized as “OscarsSoWhite” in recent years, leading the film academy to greatly expand membership. 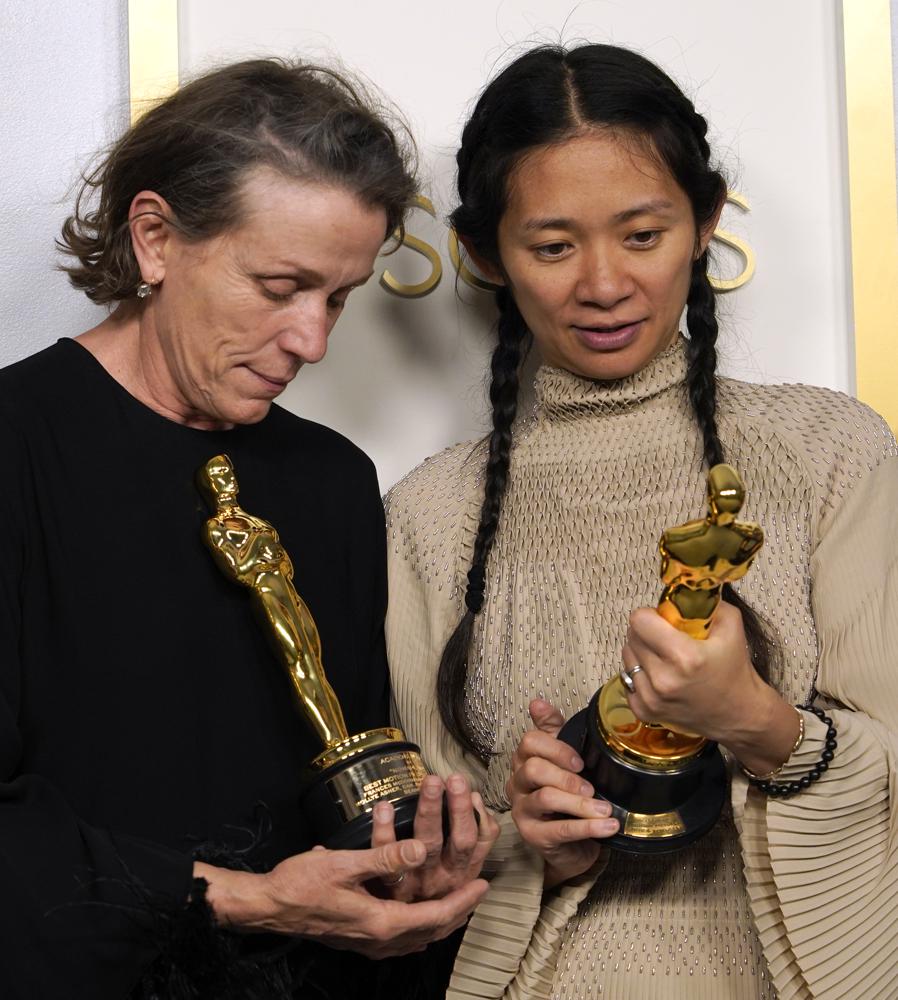 The ceremony — fashioned as a movie of its own and styled as a laid back party — kicked off with opening credits and a slinky Regina King entrance, as the camera followed the actress and “One Night in Miami” director in one take as she strode with an Oscar in hand into Los Angeles’ Union Station and onto the stage. Inside the transit hub (trains kept running), nominees sat at cozy, lamp-lit tables around an intimate amphitheater. Some moments — like Glenn Close getting down to “Da Butt” — were more relaxed, but the ceremony couldn’t just shake off the past 14 months.

“It has been quite a year and we are still smack dab in the middle of it,” King said.

Daniel Kaluuya won best supporting actor for “Judas and the Black Messiah.” The win for the 32-year-old British actor who was previously nominated for “Get Out,” was widely expected. Kaluuya won for his fiery performance as the Black Panther leader Fred Hampton, whom Kaluuya thanked for showing him “how to love myself.” 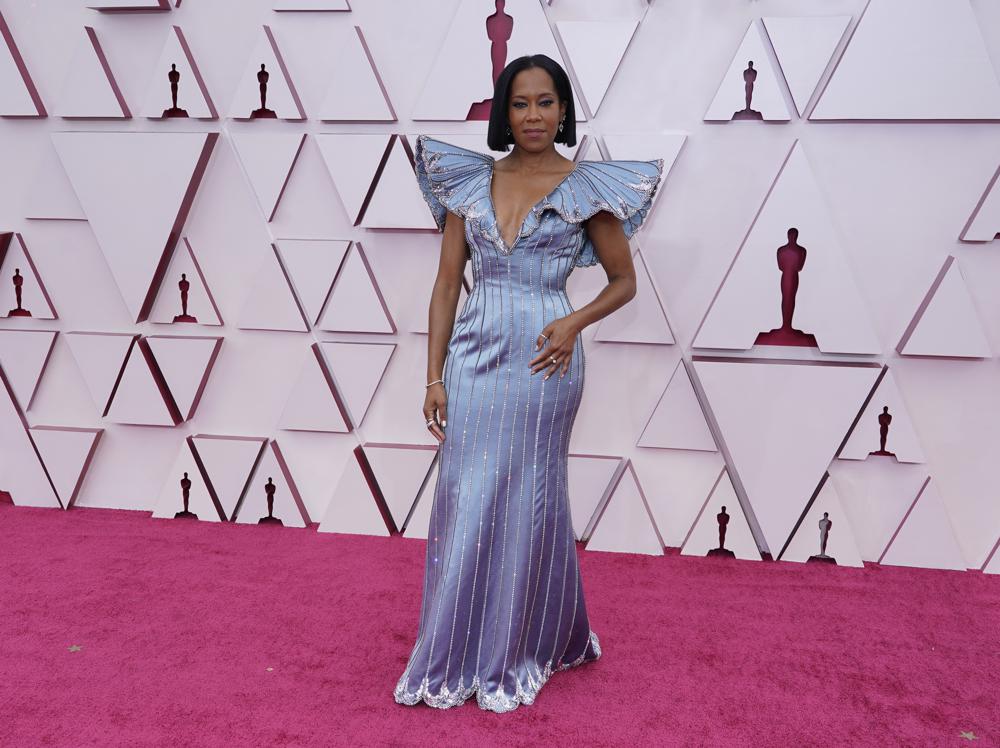 With the awards capping a year of national reckoning on race and coming days after Minneapolis police officer Derek Chauvin was convicted for killing George Floyd, police brutality was on the minds of many attendees. King said that if the verdict had been different, she might have traded her heels for marching boots.

Travon Free, co-director of the live-action short winner “Two Perfect Strangers,” wore a suit jacket lined with the names of those killed by police. His film dramatizes police brutality as an inescapable time loop like a tragic “Groundhog’s Day” for Black Americans.

Best supporting actress went to Youn Yuh-jung for the matriarch of Lee Isaac Chung’s tender Korean-American family drama “Minari.” The 73-year-old Youn, a well-known actress in her native South Korea, is the first Asian actress to win an Oscar since 1957 and the second in history. She accepted the award from Brad Pitt, an executive producer on “Minari.” “Mr. Brad Pitt, finally,” said Youn. “Nice to meet you.”

Hairstylists Mia Neal and Jamika Wilson of “Ma Rainey’s Black Bottom” became the first Black women to win in makeup and hairstyling. Ann Roth, at 89 one of the oldest Oscar winners ever, also won for the film’s costume design. 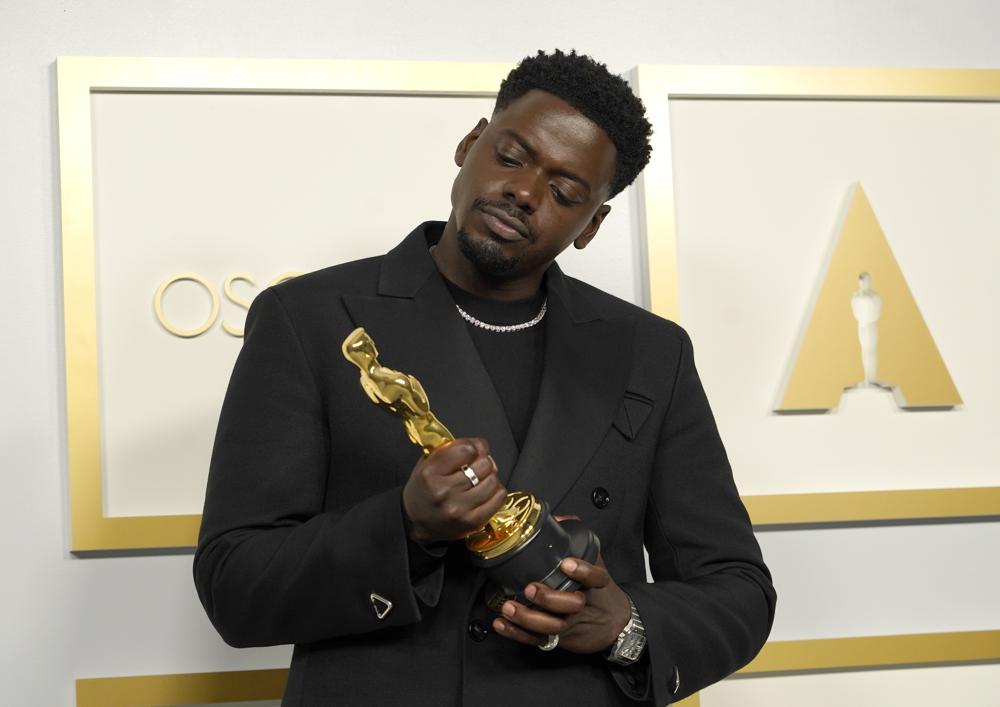 The night’s first award went to Emerald Fennell, the writer-director of the provocative revenge thriller “Promising Young Woman,” for best screenplay. Fennell, winning for her feature debut, is the first woman win solo in the category since Diablo Cody (“Juno”) in 2007.

The telecast, produced by a team led by filmmaker Steven Soderbergh, moved out of the awards’ usual home, the Dolby Theatre, for Union Station. With Zoom ruled out for nominees, the telecast included satellite feeds from around the world. Performances of the song nominees were pre-taped and aired during the preshow. 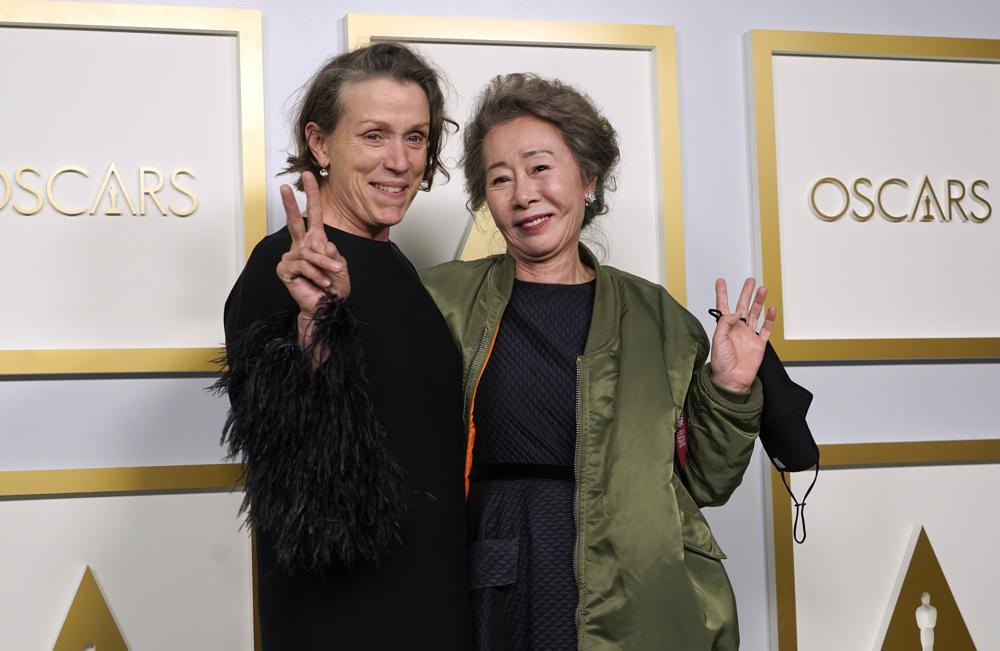 Pixar notched its 11th best animated feature Oscar with “Soul,” the studio’s first feature with a Black protagonist. Peter Docter’s film, about a about middle-school music teacher (Jamie Foxx), was one of the few big-budget movies in the running at the Academy Awards. (It also won best score, making Jon Batiste the second Black composer win the award, which he shared with Trent Reznor and Atticus Ross.) Another was Christopher Nolan’s “Tenet,” which last September attempted to resuscitate moviegoing during the pandemic. It took best visual effects.

David Fincher’s “Mank,” a lavishly crafted drama of 1940s Hollywood made for Netflix, came in the lead nominee with 10 nods and went home with awards for cinematography and for production design. Netflix led all studios with seven Oscars but again — after close calls with “The Irishman” and “Roma,” again missed out on the top award.

“My Octopus Teacher,” a film that found a passionate following on Netflix, won best documentary. Danish director Thomas Vinterberg’s “Another Round” won best international film, an award he dedicated to his daughter, Ida, who in 2019 was killed in a car crash at age 19. 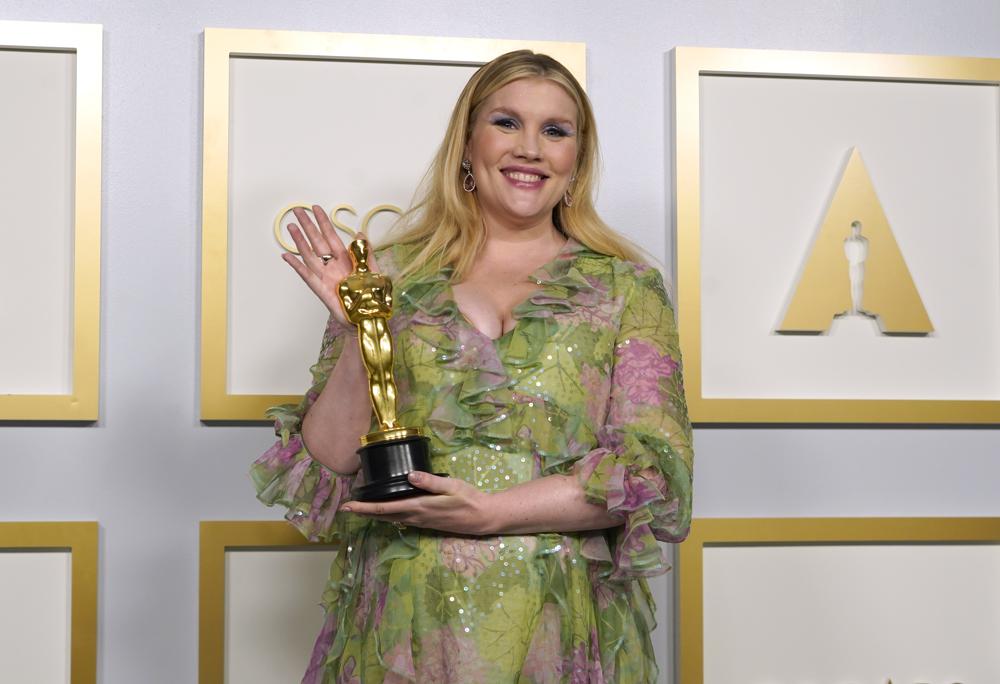 The red carpet was back Sunday, minus the throngs of onlookers and with socially distanced interviews. Casual wear, the academy warned nominees early on, was a no-no. Stars, limited to a plus-one, went without their usual battalions of publicists.

But even a good show may not be enough to save the Oscars from an expected ratings slide. Award show ratings have cratered during the pandemic, and this year’s nominees — many of them smaller, lower-budget dramas — won’t come close to the drawing power of past Oscar heavyweights like “Titanic” or “Black Panther.”

Sunday’s pandemic-delayed Oscars bring to a close the longest awards season ever — one that turned the season’s industrial complex of cocktail parties and screenings virtual. Eligibility was extended into February of this year, and for the first time, a theatrical run wasn’t a requirement of nominees. Some films — like “Sound of Metal” — premiered all the way back in September 2019. The biggest ticket-seller of the best picture nominees was “Promising Young Woman,” with $6.4 million in box office.