It was clear from the beginning that the US men’s team was not going to have a good day as four of their starters suffered varied injuries within the first five minutes of the opening whistle.

The rest held the fort conceding just a single goal through half time. But then the floodgates opened and the goals started pouring in. When it was all over, the UK Men’s team kept its word and “spanked the yanks.”

Going into the game the US team as many as 20 men suited up and warming up. That was a far cry from the dowsed enthusiasm that they had displayed up until game day. 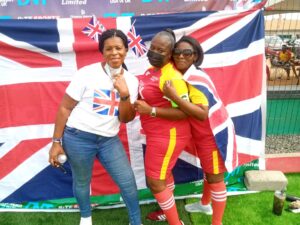 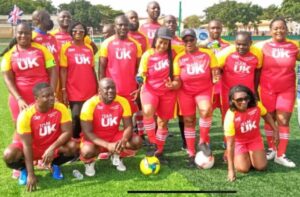 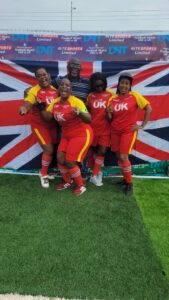 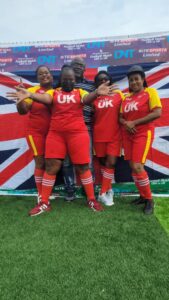 But the UK team suiting up less men was much younger. Still for a moment it appeared that the US men’s team would emulate their women in “beating the Brits.”

Ironically the 20-man team would soon be depleted and looking for bodies to suit up leading to an attempt to inject “foreign players” in their lineup to which the UK team vehemently and successfully protested.

The US men shot themselves in the foot by earlier protesting against the inclusion in the UK women’s penalty kickers of a DNT Staff member Gifty Okoampah who ‘plays like a man,” as one US player described her.

Like they say, what goes around, comes around. With the Us men’s team looking for bodies to help them to contain the UK onslaught, they in turn attempted to include non-US returnees, which didn’t work.

In the end, when the game had been all but decided, the UK team looked the other way as the US men’s sneaked striker Yaw Sakyi of RiteSports into its line up, but it still didn’t help matters.

The UK men’s team secure the bragging rights and their US counterparts had to eat humble pie after winning the trash talk.

The Diaspora Returnees Football Game was organized by DNT and RiteSports to offer members of the Ghanaian Diaspora who have returned home to have fun together and network.

The game attracted a large audience and everyone had fun. Next up is a game between Diaspora Returnees from Canada against their counterparts from The Netherlands at a date to be announced soon.

GSA calls for strict enforcement of standards in the country

GSA calls for strict enforcement of standards in the country