Ugandan opposition leader Bobi Wine has hinted security forces have surrounded his residence and put him under house arrest before a planned campaign rally.

In a series of Tweets on Tuesday December 14, 2021, the singer-turned-politician, who has suffered several arrest ever since he declared his ambition, informed police and military officers deployed overnight had banned him from leaving his house in Magere, north of the capital, Kampala.

This morning, ahead of my planned visit to Kayunga District to campaign for our flag bearer, the police and military deployed overnight around my home in an apparent attempt to block me from leaving. The cowardly regime is on its way out. A matter of time.#WeAreRemovingADictator pic.twitter.com/Iopz14Uwoq

Robert Kyagulanyi, real name was set to campaign in support of an opposition candidate running in a by-election in the central district of Kayunga, where Museveni is also expected to hold a rally. 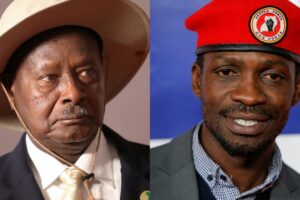 see series of tweets by Unganda politician Bobi Wine below;

The military has increased deployment around my home. No one is allowed to leave or enter. Our security guard and gardener have been violently arrested, beaten and bundled into 'drones' outside our gate. Their phones confiscated. #WeAreRemovingADictator #NTVUganda photos pic.twitter.com/3VDzs8DMt0

As this soldier stands on the road leading to my house to prevent me from exercising my freedom to move, I wonder what goes on in his mind. Freedom will surely come to Uganda. We shan't stop at nothing in pursuing it. pic.twitter.com/DBz0aIuayI

Mandatory Vaccination Kicks Off At KIA – Over 100 Travellers Jabbed

Mandatory Vaccination Kicks Off At KIA - Over 100 Travellers Jabbed