A 300-meter “suspension bridge” across the Volta Lake which is part of the Tema/Mpakadan eastern rail line is nearing completion according to Yaw Owusu, CEO of Ghana Railway Development Authority.

Overall, the 97 kilometer Tema/Mpakadan stretch estimated to cost almost “half a billion dollars” forms part of an ambitious railway network planned by the Nana Addo administration and projected to be 500 kilometers in all by the end of 2024. 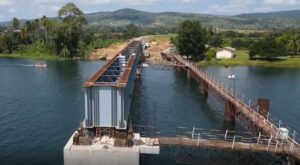 In an interview on Diaspora Weekly on DNT that aired on Saturday, Yaw Owusu also revealed that this is the first time since independence that a concerted rail revolution has been embarked upon by any administration.

“During the colonial times, the rail industry was thriving,” said Yaw Owusu. “But post colonial times, Ghana put the brakes on maintenance an investment” in the railway industry leading to its demise.

Owusu further pointed out that “throughout history, railway is the bedrock of any socio-economic transformation anywhere you go.”

But beginning from independence, that sector had been ignored by virtually all governments until 2017 when the Ghana Railway Development Authority under the auspices of the recreated Ministry of Railway Development was empowered and resourced to begin what promises to be a railway revolution with a 3,840 kilometer master plan to touch all of Ghana’s 16 regions.