Former Ghana Football Association president Lawyer Kwasi Nyantakyi is reported to have played a critical role in Ghana’s qualification to the Qatar World Cup according to president of Coalition of Supporters’ Association of Africa (COSUA) Lawyer Sarfo Abebreseh.

But pressed in an interview on DNT’s Diaspora Weekly to shed light on his role, Nyantakyi passed up the opportunity to take credit for it. 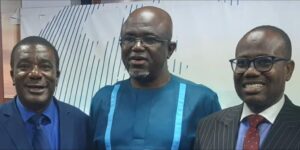 Instead he would only concede that “when you have been in the industry for a long time and built the necessary relationships, there is always something to say to a former colleague that can break a stalemate and make progress.

What stalemate Nyantakyi broke defies common sense, and may end up causing an uncomfortable stir within the Nigerian football circles.

FIFA’s rules states that in World Cup qualifying matches, the home team should submit what stadium it will host the game, and Ghana chose the Cape Coast venue for her final qualifying game with Nigeria.

As per that same FIFA rules, Ghana had to give her final confirmation of the stadium 60 days before the match, and Ghana confirmed such. After such confirmation, the venue cannot be changed especially after FIFA reps have given their final approval after inspection.

However, two weeks before Ghana hosted Nigeria, it celebrated Independence on that same venue, which celebration altered the playing field and rendered it unsuitable for the World Cup qualifier.

At that point Nigeria had the choice of a neutral country where Ghana must play her home game, and Nigeria chose Benin whose proximity to Nigeria would have essentially given her two home games against Ghana.

Ghana objected to Benin, but was arguing from a weakened position. Nigeria could have insisted on Benin, and could have had her way.

Enter Kwasi Nyantakyi, who until his unheralded departure from the helm of Ghana’s football, was ranked number two in Africa and number four in the FIFA world. And that level of influence was leveraged to the fullest.

What conversations happened between him and his former colleagues running football in Nigeria remains “classified,” but at least there is a veiled admission that he moved the dial. And it wasn’t without the approval of GFA as reported to DNT.

And as a result of this monumental intervention Nigeria inexplicably agreed to Ghana’s home game in Kumasi that resulted in a goalless draw. Who knows what the score of Ghana’s “home game” in Benin would have been.

And with that goalless draw in the Black Stars’ pocket, the 1-1 draw in Abuja placed Ghana in her fourth World Cup, the three previous ones having happened under the leadership of Kwasi Nyantakyi.

“The stone that the builders refused ……..”