Former Chelsea and Cote d’Ivoire striker Didier Drogba will not become the president of the Ivorian Football Federation (FIF) after crashing out in the first round of the election.

The Ivorian-born, English Premier League Hall of Fame inductee finished in third position during Saturday’s election in Yamoussoukro despite tabling innovative ideas backed by his funding. 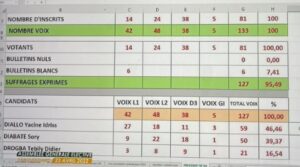 Given that no candidate obtained 50% of the votes, Diallo and Diabete will now face each other in a runoff to determine who gets to lead football in Ivory Coast.

Drogba submitted his candidacy bid on August 1, 2020, in front of a large gathering at the FIF headquarters in Abidjan.

Even with his popularity, there was doubt he could meet the eligibility requirements after the Ivory Coast Footballers Association (AFI) failed to endorse his candidacy which drew the disappointment of the African section of the International Federation of Professional Footballers (FIFPro) by suspending them.

“Football is everyone’s sport, football brings people together, football unites. We can see it today with all these people gathered in front of the headquarters of the Ivorian Football Federation,” Drogba told the media.

“It’s no secret that our football is going badly, and that is why with my team we are committed to contributing to the rebirth of Ivorian football.

“If my goal was not driven by a deep desire to give back to Ivorian football all that it has given me, to contribute to the development of football in my country, and if God was not in this candidacy, it would be difficult to be in front of you today.”