Harvey Mason, who is the Chief Executive Officer of the Grammy Awards, is in Ghana. As part of his visit, Mr Mason is expected not only to meet industry players like artists, producers, and promoters but to also assess the Ghanaian music space.

As the light shines on several GH artists, it has become imperative for the Grammy Awards to start paying much more attention to GH artists who have been doing quite well in recent years.

The highlight of the Global Citizen Festival has given Ghanaians more reasons to believe that the country has what it takes to win the Grammy Awards or participate on the bigger stages across the world.With Harvey Mason’s visit to Ghana coupled with activities in Ghana, it should give Ghanaian entertainment players a reason to be optimistic about winning something big in the foreseeable future.

In addition to meeting industry leaders like musicians, producers, and promoters during his tour, Mr. Mason is anticipated to evaluate the music scene in Ghana.

It has become crucial for the Grammy Awards to start giving Ghanaian artists that have been succeeding in recent years considerably more prominence as the spotlight shines on various Ghanaian artists.

Ghanaians now have additional reasons to think their nation has what it takes to take part on the world’s biggest stages or win the Grammy Awards appreciated to the festival’s highlight.

Harvey Mason’s visit to Ghana and the events there should give Ghanaian entertainment players cause for optimism regarding winning a significant prize in the near future.

Harvey Mason, the president and CEO of the Grammy Awards, will attend the GUBA Awards on Thursday. 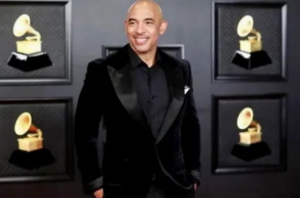 Ghana, US To Collaborate To Promote Tourism, Arts & Culture