Ghana coach Charles Akonnor has joined the war to stop the spread of the novel coronavirus pandemic in the country by donating hand sanitisers to some street hawkers in Accra.

Akonnor, who was appointed in January this year, made the donation on Friday as he contributes towards the fight against the Covid-19 virus. 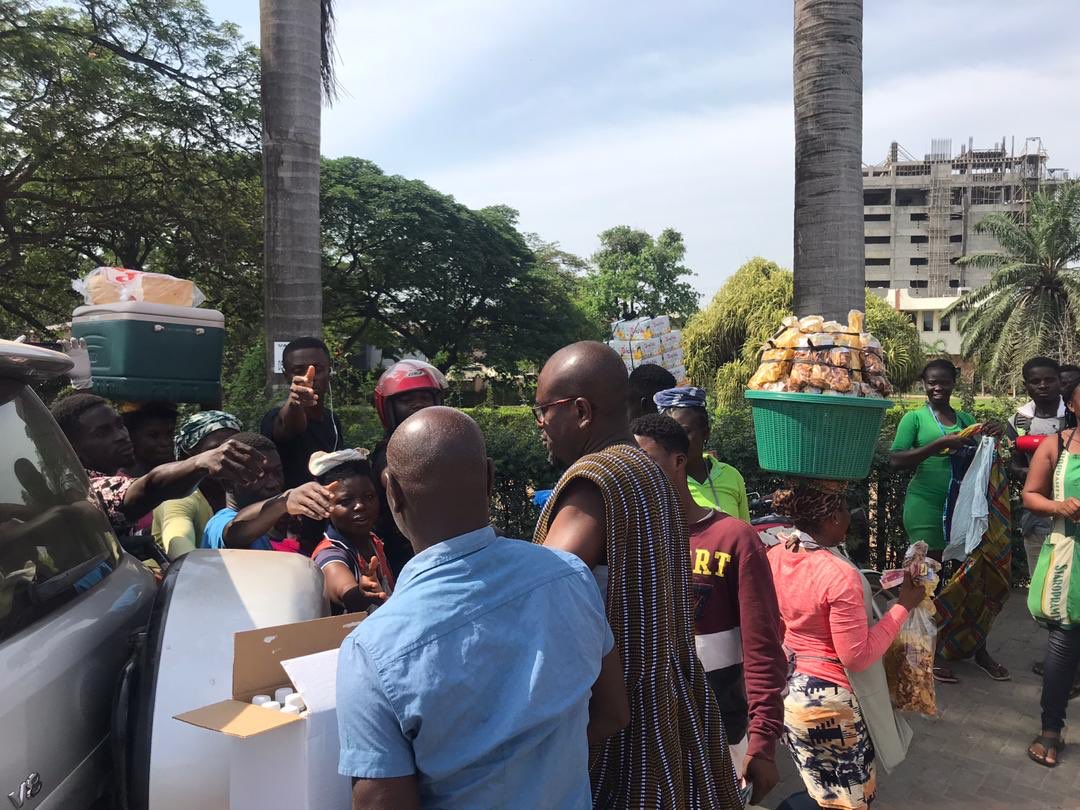 Ghana has registered 136 coronavirus cases with four deaths as of Friday, March 27.

“The #COVID19 outbreak has brought the world to a standstill and yet together affects us all. I spent my afternoon today giving out hand sanitizers to some hawkers in the capital,” he tweeted.

The #COVID19 outbreak has brought the world to a standstill and yet together affects us all. I spent my afternoon today giving out hand sanitizers to some hawkers in the capital.

The spread of the virus forced the suspension of the football activities on the continent with the Black Stars double-header 2021 Africa Cup of Nation qualifier against Sudan affected.
Source: myjoyonline

Head Coach of Bechem United Kwaku Danso has been fined GHc5000 and suspended from the Club’s next three official matches after pleading guilty to misconducts in the Ghana Premier League Match day 8 against Medeama.

Two other team officials of the Club have all been handed fines and suspensions after pleading guilty to the charges against them.

The 40-year-old won the CAF Youth African Championship with Ghana in 1999.

“My best player is Abedi Pele though he couldn’t make it to the World Cup’ but I will still choose him and when you come to those who made it to the ‘World Cup’, I will choose Stephen Appiah as my best player because he then was the captain at that time and his inspiration with the motivation.”

“He was passionate and motivated the players, that is why I chose him because there was no division in our time, we were all one as a team, we go and we did all our best.”

“That motivated us to qualify to our maiden World Cup.” He added.

Inter Milan wing-back Kwadwo Asamoah has narrated how coronavirus has affected Italy, describing it as “worrying” and “scary”.

The pandemic has taken a big toll on the Mediterranean nation with more than 70,000 cases confirmed and more than 7,000 deaths recorded.

The Northern Region of the country, where Milan is located, has been the most affected with over 30,000 cases recorded and over 4,000 deaths.

The severity of the situation has cast serious doubt on when Serie A can return to action.

“The condition in Italy now has worsened and I will say it’s not good. I am doing well but the conditions here are very bad,” Asamoah told Ghanaian radio station Peace FM.

“For now we can’t go anywhere. All training programs have been cancelled. Everything has been shut down here in Milan.

“It hasn’t been easy. We didn’t take this thing seriously in the beginning. People were still going about their daily activities that is why the virus has really spread that fast.”

More than 10 Serie A players have tested positive to coronavirus, the prominent ones being the Juventus trio of Daniele Rugani, Blaise Matuidi and Paulo Dybala.

No one from Inter Milan has been infected with the virus, but Asamoah admits the situation is scary.

“So far no Inter Milan player has contracted the disease,” Asamoah continued.

“It’s worrying to know some players have contracted the virus especially the players from Juventus because they were the last team we played against before the break.

“Even when you have a normal cough you get scared and think you having the virus.”

Ghana international Emmanuel Agyemang-Badu has shed light on the challenges of life in Italy in the wake of the deadly coronavirus outbreak.

The world has almost been brought to a standstill by the disease, also known as Covid-19, which has infected over 334,981 people and killed 14,652.

Italy, where the 29-year-old plays club football for Hellas Verona on loan from Udinese, has been the most affected nations in terms of fatalities, having recorded 5476 deaths so far.

“As I speak I have not step foot out of my door since March 6, it is very worrying out here,” he told Ghana Television on Monday night from Italy.

“Just last week my foodstuffs got finished and I had to call my physiotherapist to bring me some.

“Everywhere is closed, the only place you can go is work, hospital and maybe the supermarket.”

Like many social activities and like in many other countries, the Italian national league has been halted as part of the measures to enhance social distancing to curb the spread of the coronavirus.

The lockdown is still being observed. In Ghana, two deaths have been recorded so far from 27 infections.

All social gatherings including sporting and religious events have been banned temporarily, amid reports of an imminent lockdown.

Head coach Edward Nii Odoom wants his squad to maintain their shape while at home.

The experienced gaffer has assigned individual training drills to the players as well as grouping the squad to help them stay fit till the league resumes.

“The coach has given the players individual special training and also to make sure that they will continue to keep the shape because no one knows the league will resume.”

“We don’t want our players to lose form when they come back from the break.”

Hearts are currently 9th on the Ghana league table.

Former Manchester United midfielder Marouane Fellaini has confirmed that he has tested positive for coronavirus.

In a post on Twitter, the 32-year-old, who is now at Chinese club Shandong Luneng said he hopes “to return to the game as soon as possible”.

Chinese media reports say Fellaini is in isolation at Jinan hospital, which specialises in infectious diseases.

The Belgium international moved to China in 2019 after 11 seasons in England with United and Everton.

Fellaini, who had recently returned to the country to resume training, is reportedly the only Chinese Super League player to have contracted the illness.

A statement from his club read: “The official test confirmed that the player Fellaini has tested positive for coronavirus during the quarantine observation period.

“During this period, the player’s body temperature has been normal and there are no other discomforts. He has received further observation and treatment at a designated medical institution.”

Former Real Madrid president Lorenzo Sanz, who was hospitalised with coronavirus, died on Saturday (March 21) at the age of 76, his son announced.

Sanz was in charge of the Spanish giants from 1995-2000, overseeing two Champions League titles.

“My father has just passed away. He did not deserve this ending and in this way,” tweeted his son, Lorenzo Sanz junior.

“One of the best, bravest and hardest-working people I have ever seen. His family and Real Madrid were his passions.”

Three days ago, Sanz Jr, a former professional basketball player, said that his father had been admitted to a Madrid hospital after suffering the symptoms of the coronavirus which has killed more than 1,320 people in Spain.

Sanz claimed a place on the Real Madrid board in the mid-1980s, when the president was Ramon Mendoza.

With Jupp Heynckes as coach and star players such as Davor Suker, Roberto Carlos, Clarence Seedorf, Fernando Hierro and Raul, Real won the Champions League in 1998 by beating Juventus in the final.

It was their seventh European Cup but their first in 32 years.

Two years later, in Paris, Real claimed an eighth by beating Valencia in the final.

However, that same year, Sanz was ousted as president by Florentino Perez, who opened a new era at the club, adding five more Champions Leagues in two decades.

Atletico Madrid are looking to extend Thomas Partey’s contract through to 2025 and raise his release clause to €100 million (£93m/$108m).

As things stand, the Ghana international is tied to the Liga giants through to the summer of 2023.

Within that agreement is a €50m (£47m/$54m) asking price that can be triggered by any suitor in each passing transfer window.

Atletico are aware that big-spending rivals across Europe will have no problem finding those funds if Partey registers on their recruitment radar.

Speculation has already suggested that the highly-rated 26-year-old is being monitored by the likes of Arsenal and Manchester United.

With Premier League vultures beginning to circle, those at Wanda Metropolitano are ready to take decisive action.

Sources close to the Spanish giants have revealed to Goal that fresh terms are to be put to Partey.

Atletico acknowledge that the details within his current deal have become outdated, given the progress that has been made on the field.

A €50m price tag is no longer suitable for a player of Partey’s current ability and future potential.

Something clearly needs to be done, with Diego Simeone a big fan of the home-grown talent.

Club management and coaching staff at Atletico are happy with the attitude and performances of Partey and remain confident when it comes to contract discussions.

They are aware that prized assets on their books have been followed by many years by domestic foes and leading sides outside of Spain.

The Rojiblancos see no cause for alarm and are confident that they can present terms to Partey that will convince him that staying put remains his best option.

It is understood that the African star will be offered a sizeable increase to his salary, taking his annual income up to around €4.5m.

Atletico are also seeking to add another two years to his deal, allowing them to build long-term with a key man at the heart of their plans.

Raising Partey’s release clause to €100m will also help to fend off any unwanted interest from afar, as those planning transfer raids are forced to look elsewhere.

All parties are open to holding talks, with there hope in the Spanish capital that a renewal can soon be announced.

The Nigeria Football Federation(NFF) has suspended its football league for four weeks after the number of confirmed cases in the country increased from three to eight,

According to a statement by The NFF “the shutdown affects all on-field activities the various National Teams, the Nigeria Professional Football League, the other Leagues, youth football programmes and even street football.”

The Nigeria Women’s professional league, which was due to start on Wednesday 18 March, was postponed for administrative reasons – but has now been further held off by the new development.

This comes a day after the country called off its National Sports Festival scheduled for 22 March, a move that saw top athletes such as the Commonwealth women’s 100m record holder Blessing Okagbare cancel last-minute trips to Nigeria to participate at the games.

Nigeria joins several other African countries such as Ghana, South Africa, Morocco and Senegal to have called off football activities and sports competitions in general due to the coronavirus pandemic.