She is an industrial leader expert with over two decades of experience that complements her drive to refine and consolidate sustainable plastic material for medical applications and her name is Jacqueline A. Anim. I am yet to meet a woman more intellectually astute about plastic use, application and development than Jacqueline in the United States (US) so for now, let me be enthralled.

The Ghana-born United States (US) plastic and polymer expert is one of the leading Ghanaian women in the world of plastic technologies [in medical and automotive etc] who is a noted global leader with surpassing intellect of the Johnson & Johnson (J&J) global plastics material space. She possesses a strong combination of strategic vision and hands-on leadership in the area of material transformation engineering/innovation and producer market dynamics in relation to base business whiles improving and saving human lives.

“I started out my career in 1994 as a Materials and Process Engineer with General Motors – Delphi an OEM for Pickup trucks, Minivans, Sedan and luxury cars like the Cadillac for over 15 yrs. At this firm, my major preoccupation was working on the Materials Engineering Group till 2002 when I moved from that position to become a Senior Lead Product Engineer for about a year from 2002 and eventually became a substantive Lead Product Engineer from 2003 to 2005.“

From here Jacqueline rose up the ranks when in 2005 she assumed the Senior Advanced Research Engineer role until 2009 leading the affairs of Delphi’s Advance Development Group. Of her 15yrs spent at GM-Delphi, Jacqueline won a series of prestigious awards in her field of industry and specialization from her work as leader and director for program launches for the Chevy Malibu Sedan in a dual role as lead senior materials engineer and senior product execution engineer.

Some of her industry-wide awards recognition include a Global Excellence Award and Most Innovative Interior in Automotive Award won in 2004, Excellence in Transportation Awardand Environmental Conscious Manufacturing Award of 2005. She also won the J&J Excellence in Science Award in 2015 and most recently this year gained back-to-back recognition when the Professional Organization of Woman of Excellence Recognized (P.O.W.E.R) named her 2019 Engineer of the year and Woman of Excellence / Industry Leader respectively.

My curiosity let me to ask the amount of work that went into her winning these multiple-awards over the decades and Jacqueline revealed with a smile saying “I think that it was my enhanced customer relationships with consistent achievement of deadlines, hard-work and a customer-centric approach to design and budgeting alongside my positive attitude as a Ghanaian that has brought me this far.”

Yet I wanted to know more so I obtained the rest from a little research and from speaking to some friends of hers from which I found out that: Jacqueline through her work at GM-Delphi led a project that annually saved her employer $800K and reduced scrap another 40% with the development of a scrap-reducing touch-up process. She also achieved an annual $1.8M in scrap savings with the development of a heat gun repair process after the earlier feat. During all that, she gained 4 patents around the environmental conscious close-loop process for automotive applications.

Jackie, as she is affectionately called, is philanthropy with a passion for giving. She is currently a Director of Smiling Hope Ministry Corp, an organization whose main mission is to put a smile on the faces of children with socioeconomic disadvantages.

Presently a member of almost a dozen global professional associations like the American Society of Chemical Engineers and the Society of Plastic Engineers – Medical Polymers, Jacqueline also works at Ethicon Incorporated; a Cincinnati firm in Ohio US that has been shaping the future of surgery, surgical solutions and medical devices among others in the health care sector.

Born in Osu in Accra, Ghana, Jacqueline has been Ethicon’s Principal Materials Engineer since November of 2015 having worked in respective capacities with them over the past decade. She tells me she wants to use her expertise and experience to impact lives in Ghana and Africa as part of her effort to contribute to the acceleration of the continent’s technological development. I intend to bring you more on her soon.

The Austria chapter of the New Patriotic Party is to hold a fund raising and dinner night the prestigious Catamaran Center in Vienna, Austria.

This red carpet event themed, “Ghana Beyond Aid”, So Far, So Good, is to bring together stake holders and members of the party in both Austria and Ghana together to raise funds to support the NPP in its bid to retain power in the 2020 parliamentary and presidential elections.

See poster below for more details. 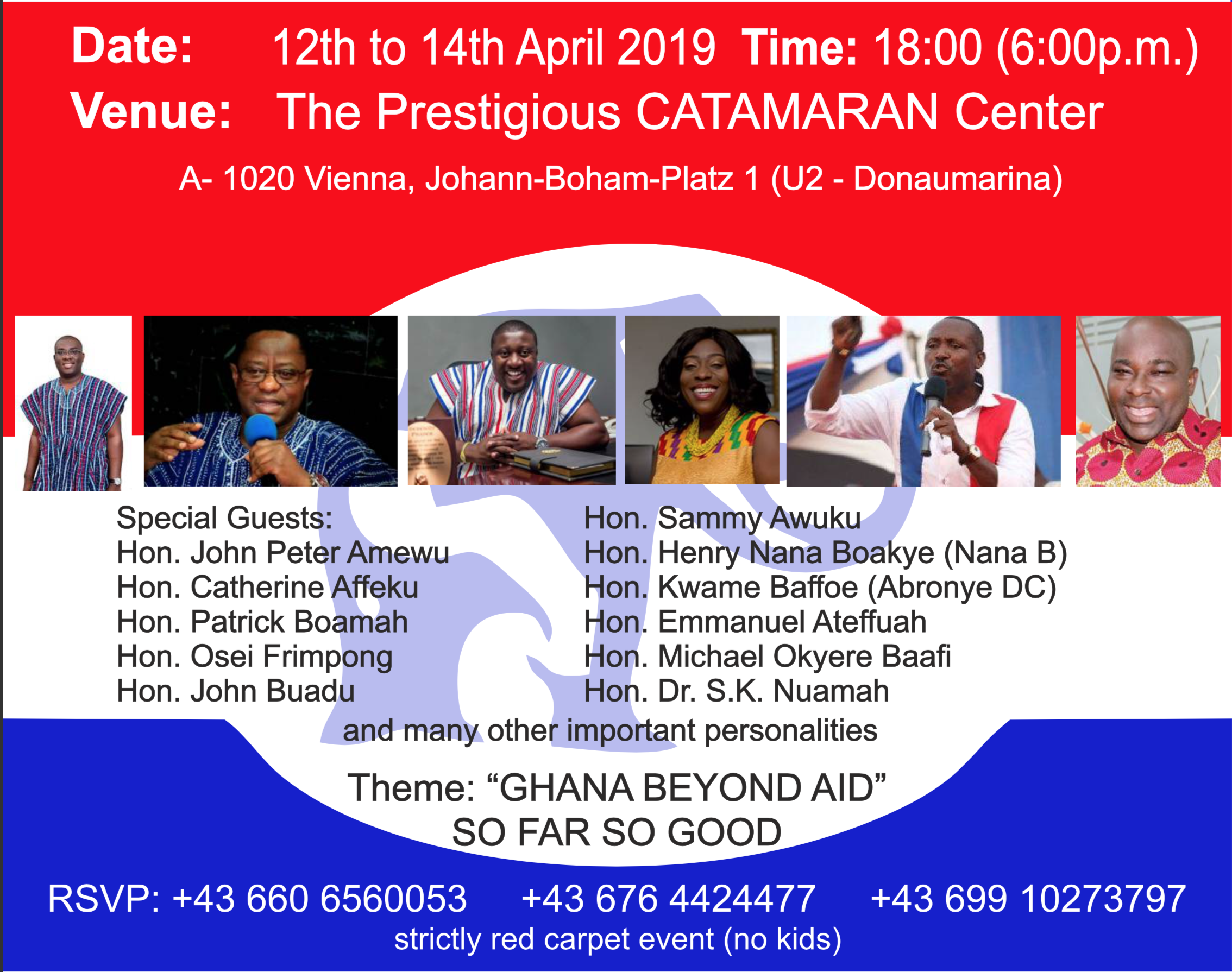 The Ghanaian community of Strasbourg- France as well as the Association of Concerned Ghanaians in Europe for Human Rights, Democratic Governance and Peace Initiatives for Africa (A.C.G.I.E.) are saddened by the sudden death of

He was humble, Brilliant, deeply principled and courageous. He hails from a family and town of entrepreneurs WIAMOASE in the Ashanti Region.

As we celebrate the life of a tireless advocate for inalienable rights of all people and for equality as a global civil society activist, The President of the Association of Concerned Ghanaians in Europe for Human Rights, Democratic Governance and Peace Initiatives for Africa (A.C.G.I.E.) on behalf of its membership join the family in mourning a departed founding human right and Geo-politician.

May the Almighty God rest his soul in eternal peace.

White House press secretary Sarah Sanders said in a statement that Trump and Kim had “very good and constructive meetings,” but that “no agreement was reached at this time.”

“Their respective teams look forward to meeting in the future,” Sanders said.

The statement followed an unexpected change in the summit’s schedule. The two leaders had planned to have a working lunch before partaking in a joint signing ceremony on Thursday afternoon.

Both events were canceled at the last minute.

#breaking The White House says NO joint agreement was reached between President Donald Trump and North Korean leader Kim Jong Un. Trump & Kim leave the summit empty handed. No deal. As one source told me, it's "a big mess" in Hanoi — and in Washington. pic.twitter.com/Y8ECtPwi9o

This is a developing story.

2019 Ghana Entertainment Awards USA To Be Held On June 29th

After successfully recognizing and celebrating Ghanaian Entertainers in the last two years, the prestigious Ghana Entertainment Awards USA is set for another spectacular showdown this year.

With a lot of anxiety and anticipation among Ghanaian Entertainment industry players in and outside Ghana ahead of the next edition, the Organizers of the awards have finally revealed the official date for this year’s awards.

The 2019 Ghana Entertainment Awards USA will be held on Saturday 29th June, 2019 in New York, USA. Prior to the main event, organizers have put together a series of activities as part of the build up to the big day including the opening of nominations, official Launch of GEA USA 19, Nominees announcement and more. With details to be revealed soon.

The Ghana Entertainments Awards was established two years ago to showcase the achievements of Ghanaian creatives and entertainers who are excelling in their craft within and outside Ghana.

The president and CEO of Diaspora Network Television (DNT), Jermaine Nkrumah has accused Ghana’s Electoral Commission (EC) of lacking the necessary seriousness when it comes to implementing the Representation of the People Amendment Act (ROPAA).

Nkrumah pointed to what appears to be a concerted effort on the part of the EC to exclude members of the diaspora community in the whole implementation process. “It’s almost like ignoring farmers to consult with taxi drivers on how best to apply fertilizers on crops,” he said on his Facebook wall.

This was in reaction to the EC’s embarking on regional consultations at places like Ho in the Volta Region at the same time that the commission is asking the courts for more time to implement the law passed 12 years ago.

“If time is of the essence, why would the EC not consult with the direct stakeholders especially when some work has already been done towards an implementation process,” he asked.

He continued to remind the EC that the amount of work that needs to be done vis-a-vis the time it will take to put a credible Legislative Instrument together covering ROPAA implementation makes it mind-boggling to see lackluster activities like regional consultations. “The direct stakeholders live outside the country, not in Ho,” he said.

In a related development, Senegalese in the diaspora voted in their country’s presidential elections yesterday. Pointing to this development Nkrumah asked “what can Senegalese accomplish that is so difficult for Ghanaians to do?”

Majority of the participants in the Volta Regional capital raised concerns about the nation’s financial inability to carry out the exercise.

In 2006, the Representative of the People Amendment Bill was introduced in Parliament to amend the representation of the People’s Law of 1992 PDNC Law 284 to make provision for Ghanaian citizens other than persons working in Ghana’s diplomatic missions, persons working with international organizations of which Ghana is a member and Ghanaian students on Government scholarship, to be registered and partake in general elections across the world.

Although the Bill was passed into law some twelve years ago, the Electoral Commission was not able to implement it until an Accra High Court ordered it to begin the process of implementation.

Dr Kwadwo Afari-Gyan, the former Commissioner of the Electoral Commission (EC) in 2011 set up a committee to make recommendations for the implementation of ROPAA that would be acceptable to all stakeholders.

The Electoral Commission has said a lot has changed since the time the committee presented its report hence the need for stakeholders to take into account new developments in Ghana’s electoral process.

A large number of the participants at the meeting said the nation would incur more losses and face lawsuits than the “actual” benefit of ROPAA.

Dr Alex Segbefia, a former Minister of Health, at the meeting lauded the Commission for its work and advised that a lot of work and research would be needed in the implementation of the programme together with the office of the Attorney General.

He suggested that in the Commission’s research into other jurisdictions, a provisional costing element should be put together to test the nation’s financial stability.

A representative from a local NGO in opposing the implementation wondered why the monies that would be spent on the implementation of a programme that may not be thoroughly successful, be used to provide potable water for communities and villages without water.

Some questioned whether or not the ROPAA could be implemented in the over 200 countries worldwide or in some selected countries, which could amount to disenfranchising Ghanaian citizens elsewhere.

The Committee is reported to be paying a working visit to Mali, South Africa, the United States and the United Kingdom who were already practising external voting for lessons.

While in the UK, he would deliver a lecture at the Royal Institute of International Affairs, Chatham House, on the topic: “Ghana’s Inclusive Economic Future: Approaches to Achieving Transformative Growth”.

This was contained in a statement signed by Mr. Frank Agyei-Twum, the Director of Communications, Office of the Vice President.

It said, Dr Bawumia would also be meeting captains of industry including officials of the London Stock Exchange and hold discussions with Senior British Government officials on ways to boost UK-Ghana relations.